Why America Is on Fire: Expect Civil Violence Into Next Summer 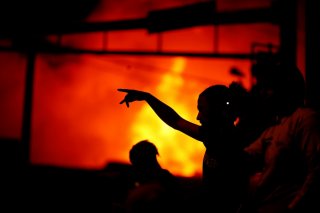 On July 4, Secoriea Turner, an eight-year-old black girl in the backseat of her mother’s car, found herself at a Black Lives Matter roadblock—this one set up directly in front of the Atlanta Wendy’s at which the police-shooting of Rayshard Brooks occurred. “They didn’t give us time to make a U-turn. They started shooting up my car before we could even make a U-turn,” recounted her distraught mother, “She died in my arm.” “They say ‘Black Lives Matter,’” remarked the little girl’s father, “You killed your own this time.” Just hours after that little girl was gunned down in Atlanta, a twenty-four-year-old mother and healthcare worker was taking a stroll with her fiancé in downtown Indianapolis after the night’s Independence Day celebrations. When a nearby group of men called out the racially-framed slogan “Black Lives Matter,” she responded with the universal slogan “All Lives Matter.” The group of men confronted the couple and drew guns on them, but the couple drew their own gun in response and managed to defuse the situation verbally before all parted ways. The group of men set up an ambush a short distance away, shot and killed Jessica Doty Whitaker with a bullet to the head. When her three-year-old son Greyson was told afterward that his mother was “an angel in heaven” now, the toddler asked his grandmother when they could “go get her and bring her back.”

Being an innocent, even unaware bystander is no protection against evil individuals following a doctrine which justifies violence done in its name. That being said, these were indeed bystanders. The doctrine which resulted in their killings did not mark them as targets from the outset, but there are targets which it does call out for attack. Among the institutions to be targeted: Catholicism, as illustrated by the dismemberment of a statue of devotion to the Most Sacred Heart of Jesus on June 3; the American judicial system, as illustrated by the still ongoing two-month-long siege of the Mark O. Hatfield U.S. Courthouse and Justice Center buildings, which Antifa has incessantly fought to seize or destroy using melee weapons and explosives; and American history, as illustrated by the toppling and slogan-painting of a statue of George Washington on June 18. Some of these referenced attacks were presumably uncoordinated while some were coordinated at the tactical level, but the doctrine also calls for attacks coordinated at the strategic level. The 1619 Project, launched eleven months ago by the New York Times, is one such campaign and the most salient with regard to the ongoing nationwide civil violence sparked by the death of George Floyd. Its target: the institution of American history, which it seeks to dishonestly rewrite using discredited scholarship, equivocal arguments, and unsubstantiated claims.

Even if the spontaneous attacks on those individuals detailed were to be excused away as products of unbridled passions, the premeditated attacks on those institutions detailed, as well as countless more unmentioned here, were carried out under the banner of Black Lives Matter. However, it does not follow from the assertion that “black lives matter” to therefore dismember a statue of the Logos, or therefore set fire to a federal courthouse, or therefore topple and deface a memorial to the Founding Father who, in the words of Frederick Douglass, refused to “die till he had broken the chains of his slaves.” The reason for the disconnect between these attacks and the assertion that “black lives matter” is that they were not carried out under the banner of an assertion but rather of a brand: Black Lives Matter, otherwise known as BLM. That brand of a deeper movement is just one head of the Hydra which has set America on fire, but such a noble visage as afforded by the assertion “black lives matter” necessitates that the head’s rotten flesh first be exposed before discussing the Hydra itself.

Black Lives Matter is not concerned with the worth or well-being of black individuals. In fact, its motives and methods are plainly racist to any who refuse to avert their gaze. In an interview on July 9, Officer Jakhary Jackson of the Portland Police Bureau—a black man and nine-year veteran officer who’s been serving on the front lines of the Portland Siege for two months now—shared his testimony to this. “I got to see folks that really do want change like the rest of us, that’ve been impacted by racism, and then I got to see those people get faded out by people that have no idea what racism is all about—never experienced racism, that don’t even know that the tactics that they are using are the same tactics that were used against my people. […] Coming from someone who graduated from [Portland State University] with a history degree, it’s, it’s, it’s actually frightening on how, you know, they say if you don’t know your history you’ll repeat it. […] It says something when you’re at a Black Lives Matter ‘protest,’ you have more minorities on the police side than you have in a violent crowd and you have white people screaming at black officers ‘You have the biggest nose I’ve ever seen.’”

Postmodernism, the Hydra in question, is a school of thought whose essence is captured in its rejection of absolute truth—ironically itself an absolute position—and whose directive is regime change. Unlike Postmodernism, neither Enlightenment Liberalism nor Marxism rejected absolute truth, though they did differ on what “the truth” was. As a result, Postmodernism is thoroughly anti-logos in the senses of language, logic, and divinity. Postmodernism was born in the 1960s as an evolution of Marxist philosophy to disillusioned, largely French, Marxist philosophers—Jean Baudrillard, Gilles Deleuze, Félix Guattari, Jean-François Lyotard, Jacques Derrida, Michel Foucault, et cetera—and for this reason is considered a post-Marxist or neo-Marxist school of thought. Key to understanding the Hydra and its heads, which assail America at present, are two developments which arose within the Marxist school of thought in the 1920s: the concept of Cultural Hegemony, developed by former General Secretary of the Italian Communist Party Antonio Gramsci, and the tool of Critical Theory, developed as part of the Frankfurt School of thought associated with the Institute for Social Research. This pair of concept and tool were retained and developed by Postmodernism into an approach of deconstruction which Archbishop Carlo Maria Viganò identified, in a recent letter to President Donald Trump, as the untruth of Alchemy, the adage of Freemasonry, the motto of Baphomet: "Solve et Coagula," meaning “dissolve and coagulate.” Solvent is to be applied totally in order to bring about total regime change. Nothing is exempt, including the “hard sciences,” as evidenced by the experiences of biologists Bret Weinstein and Heather Heying.

Around the 1980s, the tree of Postmodernism yielded fruits by the name of Intersectionality, Identity Politics, and Critical Race Theory. These are the three fruits of Postmodernism most prominent in the present tumult. They are the racist and white supremacist propositions—that is to say racist and white supremacist as Martin Luther King Jr. would have understood the terms, not “racist” and “white supremacist” as Postmodernism has redefined the terms—which justified racial segregation at the CHAZ, which placed the repeal without replacement of California’s constitutional protection against racial discrimination in government hiring and public education on November’s upcoming ballot, and which were endorsed by the Smithsonian’s National Museum of African American History and Culture all within the past two months. Over the past four decades, the production of Postmodern scholarship has grown exponentially within environments which insulate these products from rigorous academic criticism. By today, these decades of incestuous and defective academic work have built up a body of literature which serves as scripture to an atheistic—not merely nontheistic—religion. Where Catholicism has Original Sin, Postmodernism has Privilege; where Catholicism has the Sacrament of Reconciliation and the reception of Sanctifying Grace, Postmodernism has perpetual atonement through Allyship but no means of redemption.

In the absence of the Hydra, the actions of Derek Chauvin—regarded as inexcusable even among police apologists—during the George Floyd incident doubtless would have sparked major riots in Minneapolis and potentially other major cities. The consensus-producing viral footage of the incident coupled with the reduction of work obligations, the compounding financial strains, and the mounting psychological effects across the population resulting from the coronavirus pandemic would have guaranteed this, and yet what was sparked was far more than even this. The reason why is that a low-intensity “culture war” between Postmodernism and Enlightenment Liberalism had been bubbling, then boiling, for years, and the George Floyd incident provided an opportunity for transition from cultural skirmishing to a Cultural Revolution, so Postmodernists have been leveraging the Black Lives Matter brand since the incident to either achieve this outright or lay the groundwork for a subsequent attempt.

Expect Civil Violence Into Next Summer

There is no evidence to suggest that the acts of terrorism which have continued over the past two months will not continue over the next two and beyond. The nationwide civil violence will eventually cease, but not until the population-wide fear of job loss maintained by the coronavirus pandemic dissipates, as this fear diminishes resistance to political violence and suppresses criticism of the Hydra. This is unlikely to occur before the end of spring. Between now and then, the presidential election will serve to escalate civil violence.