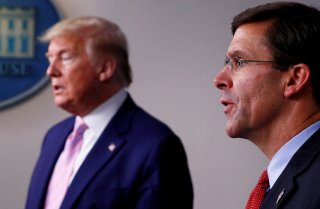 President Donald Trump took to Twitter to announce that he had booted Defense Secretary Mark T. Esper on Monday, closing up his tenure with his fourth Pentagon chief in less than two years.

“I am pleased to announce that Christopher C. Miller, the highly respected Director of the National Counterterrorism Center (unanimously confirmed by the Senate), will be Acting Secretary of Defense, effective immediately,” the president said in a stream of tweets. “Chris will do a GREAT job! Mark Esper has been terminated. I would like to thank him for his service.”

Although Esper’s firing has been expected since at least June as he clashed with Trump in the past, the move pushes the Pentagon into national security mayhem during a period of domestic tension with the presidential transition and potential threats bleeding from countries like Russia and China.

“Adversaries look for windows of opportunity, so it’s particularly important during this uncertain transitional period to have stable leadership in place,” Michael J. Glennon, professor of international law at The Fletcher School at Tufts University, said. “It’s not the time to play musical chairs with the Pentagon’s leadership.”

Other national security experts echoed Glennon’s concerns, noting that it puts the country at risk from current adversaries.

“This is quite dangerous and ill-advised. It leaves the United States exposed,” Laura A. Dickinson, an Oswald Symister Colclough Research professor of law and professor of law at The George Washington University Law School, said.

Dickinson added, “It creates a leadership crisis at the Pentagon, potentially, and could open the United States up to increased risk from our adversaries at this time, and I think it’s indicative of what may be a quite chaotic transition between now and Jan. 20 when President-elect Biden will take office. And I think that that’s a very troubling, troubling thing.”

Even though Joe Biden will likely name a new defense secretary, Dickinson said that  “stability is very important,” especially during a time in which Biden’s team is preparing to take the White House in just two months—a process that’s been neglected fair access to presidential transition resources as Trump’s team refuses to help.

Trump and Esper have had a shaky relationship since summer protests surrounding racial injustice issues following the police killing of George Floyd. Amid protests soaring through the country, Trump demanded that thousands of troops be deployed to calm the violence and rioting and later called to invoke the Insurrection Act to active-duty service members, requests that Esper and other top officials publicly opposed, citing that military force would politicize the matter. Esper’s rejection angered Trump.

In July, the defense secretary noted his openness to rename Army posts that honored Confederate figures, while Trump tweeted his opposition to the removal of those names days later.

Just a month after the two collided over renaming the Army bases, the president advertised his disapproval of Esper at a press conference, dubbing the Pentagon chief as “Yesper,” a nickname he received for being too attentive to Trump’s needs.

“Mark Yesper? Did you call him Yesper?” Trump said. “I consider firing everybody. At some point, that's what happens.”

Democrats blasted the president’s sudden initiative, expressing concern over the dangers the decision implies during a period of presidential transition.

“It has long been clear that President Trump cares about loyalty above all else, often at the expense of competence, and during a period of presidential transition competence in government is of the utmost importance,” Smith added.

Miller, Esper’s replacement, has previously worked on the National Security Council and has worked on counterterrorism at the Department of Defense.

“Miller seems solid enough, but he’s fairly low-level and he’s not widely known outside of national security circles,” Glennon said. “It could appear he’s being picked because he’s willing to go along with uses of the military that Esper is not. That could raise doubts about the soundness of any decision to use force in a potential crisis—which is the last thing the country needs at this point.”