Why Does Mitch McConnell Fear the Child Tax Credit? 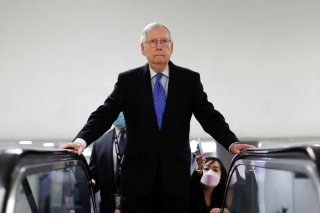 Throughout all of the considerations of the expanded child tax credit, from the initial debate in March of 2021 to its passage that month to the late 2021 debate over whether to extend it, it was almost entirely Democrats who supported the proposal and Republicans who opposed it.

Now, an upcoming book is claiming that the Republican leader in the Senate feared that the credit would be so popular that it would hurt his party.

The book, This Will Not Pass: Trump, Biden, and the Battle for America’s Future, is scheduled for release this week and was authored by New York Times reporters Jonathan Martin and Alexander Burns. The book covers both the 2020 election and its aftermath, and that includes the initial parts of the Biden legislative agenda in early 2021.

Business Insider obtained a copy of the book, which specifically details the reaction of Sen. Mitch McConnell (R-KY), the Senate Minority Leader, to the American Rescue Plan Act. McConnell was always opposed to the bill and voted against it, but the book states that he privately worried that some aspects of it would be so popular the GOP would have trouble undoing it.

“Talking to a friend a few weeks after Biden signed the rescue bill into law, McConnell confided that he was deeply concerned that the Democratic legislation could have much far-reaching effects on the country that would make it hard for Republicans to undo benefits like the child tax credit even if they retook Congress in 2022.”

The book goes on to say that if voters got used to that benefit and others in the American Rescue Plan Act, “it would become politically untenable for Republicans to repeal its most popular measures.”

That’s not quite what happened. While the White House and Democrats in Congress spent much of the rest of 2021 trying to extend the new tax credit and possibly even make it permanent, they eventually settled on a one-year extension, as part of the Build Back Better legislation that passed the house in December. However, that bill died in the Senate and has not since been revived. With Sen. Joe Manchin (D-WV), who opposed the Build Back Better bill, continuing to not back the credit, its chances of returning in any form remain very poor during the current Congress.

And while various studies have shown that the expanded child tax credit succeeded in reducing child poverty, by early 2022 supporters of it were wondering why the credit wasn’t more popular.

One poll recently found that Republicans have gained an advantage in the midterm elections among those who received the child tax credit.