Why Has Plastic Recycling Failed? 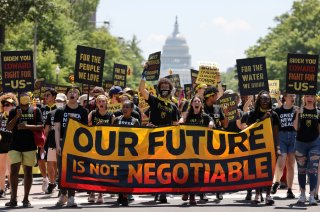 For decades, Americans have been encouraged to recycle plastic as part of the solution for saving the planet. But now, a new report from Greenpeace says that it just doesn’t work anymore.

According to Greenpeace, “U.S. households generated an estimated 51 million tons of plastic waste in 2021, only 2.4 million tons of which was recycled.” The report is titled “Circular Claims Fall Flat Again.”

“The plastics and products industries have been promoting plastic recycling as the solution to plastic waste since the early 1990s,” the report said. "Some 30 years later, the vast majority of U.S. plastic waste is still not recyclable. The U.S. plastic recycling rate was estimated to have declined to about 5–6% in 2021, down from a high of 9.5% in 2014 and 8.7% in 2018, when the U.S. exported millions of tons of plastic waste to China and counted it as recycled even though much of it was burned or dumped.”

Greenpeace issued a similar report in 2020. But the problem, the organization said, has gotten worse in the last two years.

"Since 2020, an even greater barrier to plastic recycling than poor economics has come into focus through scientific research and testing: the toxicity of recycled plastic,” Greenpeace said. “According to a 2021 report published by the Canadian Government, toxicity risks in recycled plastic prohibit ‘the vast majority of plastic products and packaging produced’ from being recycled into food-grade packaging.”

There are five reasons for this, they explain.

“Mechanical and chemical recycling of plastic waste has largely failed and will always fail because plastic waste is: (1) extremely difficult to collect, (2) virtually impossible to sort for recycling, (3) environmentally harmful to reprocess, (4) often made of and contaminated by toxic materials, and (5) not economical to recycle.”

So what, exactly, is the way forward?

“The failure of the concept of plastic recycling is finally becoming impossible for the companies and industry associations that promote it—and the nongovernmental organizations (NGOs) that they fund for this purpose—to ignore. After three decades and billions of dollars of taxpayer spending, the excuse offered by the American Chemistry Council (ACC) that plastic recycling is still “in its infancy” can now be seen for the delaying tactic that it is.”

“Corporations like Coca-Cola, PepsiCo, Nestlé, and Unilever have worked with industry front groups to promote plastic recycling as the solution to plastic waste for decades,” Lisa Ramsden, Greenpeace USA’s senior plastics campaigner, said in the release. “But the data is clear: practically speaking, most plastic is just not recyclable. The real solution is to switch to systems of reuse and refill.”