Why Joe and Kamala Are Smiling? Jobless Claims Dropped for Fifth Week In A Row 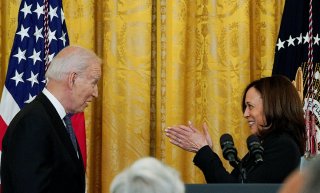 New jobless claims fell to 385,000 last week, according to data released by the Labor Department on Thursday, marking the lowest total since the early days of the coronavirus pandemic.

The department reported that initial weekly jobless claims dropped by 20,000 for the week ended May 29, a decrease from the previous week’s revised total of 405,000 and slightly below economists’ predictions of 393,000.

“New jobless claims have sunk to a fresh pandemic low, falling for a fifth straight week. The seasonally adjusted headline number is now below 400,000, which has often been seen as psychologically important during past economic downturns,” said Mark Hamrick, Bankrate’s senior economic analyst.

Claims haven’t reached this low since the week of March 14, 2020 when the figure was 256,000. But once the virus struck the U.S., claims hit three million and reached as much as 6.1 million in April 2020 when the businesses had to shut down due to the rapid spread of the disease.

The figure, however, indicates that a slow economic rebound is approaching and that the job market is slowly reaching pre-pandemic levels as more people are vaccinated and feel comfortable returning back to work, going out to eat and shopping in-store.

“The realignment of employment and the economy more broadly will require more time to normalize to something new as spending increases on services and more Americans resume activities freed by vaccinations and lifting of COVID-19 restrictions,” Hamrick said.

The department data also comes as the May employment report is set to be unveiled Friday, where economists predicted that the economy added 671,000 jobs last month, after a lower-than-expected jobs report for April, gaining just 266,00 jobs. Economists also anticipate that the unemployment rate will drop from 6.1 percent in April to 5.9 percent in May.

The number of applications for Pandemic Unemployment Assistance, a program created for gig economy and self-employed workers who are not eligible for traditional unemployment insurance, also dropped to 76,098, according to the most recent data.

While the report indicates that the economy is inching toward a recovery, continuing claims rose to 3.77 million last week.

Hamrick also pointed to the 15.4 million Americans who are still receiving some type of jobless aid, a figure that’s “still historically elevated but coming down.” That figure reached 15.8 a week earlier.