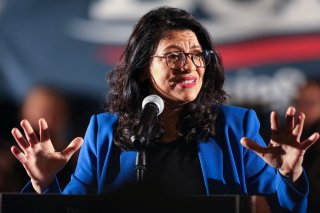 “He hasn't directly called me or anything, but, no, right now I'm focused on my election, my constituents and my residents,” Tlaib told Newsweek.

Tlaib added that her focus for the upcoming presidential election is to rally Michigan’s support for Biden and get President Donald Trump out of office. But, encouraging her constituents to vote for the presumptive Democratic nominee has been a bit challenging -- arguments that she wants to avoid.

“Residents come up to me and say, ‘Rashida, I don't know. I hear Joe Biden this, Joe Biden that.’ I say, ‘Listen, do we need another four years of Trump? No. Then what I need you to do is go out there and focus on that.’ If the ultimate goal is to get rid of Donald Trump, that doesn't have to involve me actually endorsing Biden,” she said.

Tlaib, however, did endorse Bernie Sanders during his presidential run in October.

"I am endorsing Amo Bernie Sanders because he's not gonna sell us out," she said in a clip, mentioning her nickname for the Vermont senator. "He understands that it's not just about policies and about words, but it's going to be also about completely transforming the structures in place."

"We deserve someone who writes the damn bills," Tlaib said at a Sanders rally. "We deserve Bernie Sanders."

Former Michigan Rep. and co-founder of the Congressional Black Caucus, John Conyers Jr., served the district before Jones temporarily took his place after he stepped down from his seat due to sexual harassment accusations. In a special election, Tlaib beat Jones in a tight race for the remainder of Conyers’ term.

Jones has rallied support from the other candidates who ran in the special election, giving her an advantage in the primary race. The Detroit City Council President has claimed that Tlaib doesn't provide her district with enough attention, as the focus has shifted towards national needs.

“You can be vocal, but the things that were being done — like calling the president a ‘MF’ or booing Hillary — every time something like that happened, I was getting calls from people saying ‘You’re more professional than this,’” Jones told The New York Times. “I’m not interested in being a rock star. I’m just interested in bringing home the money, working for the people of the 13th district and uniting the community.”