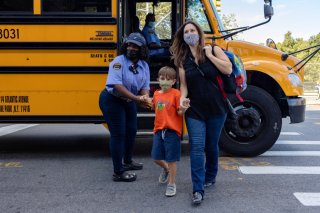 The chair of the Federal Communications Commission (FCC) has made a proposal that would abridge the digital divide—and what she calls the “homework gap”—in an untraditional way.

The proposal would allow for the use of federal funding for Wi-Fi on school buses. “The Declaratory Ruling, if adopted, would allow E-Rate program funding to equip school buses with Wi-Fi, providing substantial benefits to students, including millions of students caught in the Homework Gap,” the announcement says.

The ruling would make E-Rate funding available for school bus Wi-Fi. That sort of funding typically goes to schools, libraries, and other such public institutions.  “While we’ve made progress getting many more families connected through our various broadband funding programs, the Homework Gap is still a hard fact of life for millions of schoolchildren in urban and rural America,” FCC chairwoman Jessica Rosenworcel said in a statement. “Wiring our school buses is a practical step we can take that is consistent with the history of the E-rate program. This commonsense change could help kids who have no broadband at home. I look forward to having my colleagues join me in approving this step to support the online educational needs of our nation’s schoolchildren.”

Such funding has happened before, through the Emergency Connectivity Fund, which was approved on a temporary basis as part of the Covid-19 relief packages.  Rosenworcel announced the plan at the meeting of the National Coalition for Technology in Education & Training. An FCC commissioner since May of 2012, Rosenworcel became acting chair of the agency in January 2021, at the start of the Biden administration, and was confirmed as the permanent FCC chair in December 2021.

Rosenworcel coined the phrase “the homework gap” in a 2014 op-ed for the Miami Herald. “If you are a student in a household without broadband, just getting homework done is hard, and applying for a scholarship is challenging,” the now-FCC chair wrote of that specific issues at the time. “While low-income families are adopting smartphones with Internet access at high rates, a phone is not how you want to research and type a paper, apply for jobs or further your education.”

That piece did not propose the idea of Wi-Fi on buses, instead focusing at the time on more Wi-Fi for libraries. “There are 25 million kids in this country who ride school buses. Not all of them have internet access at home,” Rosenworcel said on Twitter. “But they all now need it for education. So let's do something creative and connect school buses to Wi-Fi nationwide. Call it Wi-Fi on Wheels.”