Will the Feds Shut Down DeSantis’ Migrant Flights? 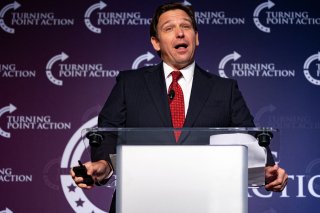 House Homeland Security Committee chair Bennie Thompson (D-MS) on Thursday called for a federal probe of Florida Gov. Ron DeSantis over his decision to transport roughly fifty migrants to Martha’s Vineyard in Massachusetts, according to a new Axios report.

“I write with grave concern regarding the allegations that the migrants who were flown to Martha's Vineyard on September 14 were coerced to board the flight through false information,” Thompson wrote in a letter to the Department of Justice and the Department of Homeland Security.

He urged for an investigation into whether federal laws were violated and an “immediate review of the circumstances regarding these individuals’ release into and transport within the United States.”

When asked whether he expects the administration to follow up, Thompson told reporters at the U.S. Capitol: “I think a letter from the chairman … asking for them to review it would be enough.”

Also on Thursday, CNN reported that State Sen. Jason Pizzo, a Miami Democrat, filed a lawsuit asking a court to block DeSantis from transporting more migrants from the southern border. He contended that the Republican governor illegally misspent taxpayer dollars by flying out the migrants on two flights. This past year, state lawmakers green-lighted $12 million for a program to transport migrants, but the budget specified that the funds were to relocate “unauthorized aliens from this state.”

“If we are able to get this in front of a man or a woman in a black robe, how the hell is the state going to contend any of these people are from Florida?” Pizzo told the news outlet.

It is the second lawsuit filed this week seeking to stymie the controversial program that DeSantis has defended vigorously amid rising criticism from Democrats and the White House.

On Tuesday, three migrants flown to Martha's Vineyard filed a class-action lawsuit against DeSantis and other state officials, claiming they were victims of fraud for political purposes.

“These immigrants, who are pursuing the proper channels for lawful immigration status in the United States, experienced cruelty akin to what they fled in their home country,” said the suit. “Defendants manipulated them, stripped them of their dignity, deprived them of their liberty, bodily autonomy, due process and equal protection under law, and impermissibly interfered with the Federal Government’s exclusive control over immigration in furtherance of an unlawful goal and a personal political agenda.”

In addition to seeking damages, the lawsuit asked the court to block DeSantis and others from “inducing immigrants to travel across state lines by fraud and misrepresentation.”