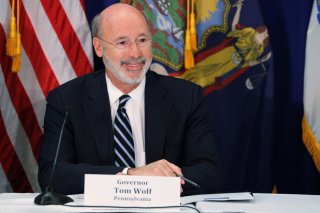 The governor of Pennsylvania and his legislative allies are again pushing a plan to send $2,000 checks to citizens of that state in a proposal called the PA Opportunity Program.

In a statement this week, Gov. Tom Wolf pushed the proposal that would spend $1.7 billion to send $2,000 to Pennsylvania families who earn a household income of $80,000 or less. The money would be paid for out of Pennsylvania’s general fund.

“I first proposed the PA Opportunity Program back in February, but Republican leaders in the General Assembly just wouldn’t get on board with funding it in this year’s budget,” Gov. Wolf said.

“However, as I’ve traveled the commonwealth, I’ve heard directly from so many people about how much this program would mean to them and their families. I’m not going to stop fighting until the people of Pennsylvania get the help they need and deserve.”

“The COVID-19 pandemic has taken a major toll on Pennsylvanians. It is time we step up to help Pennsylvanians now,”  Rep. Delloso said in the governor’s statement. “That is why I am introducing updated legislation to create the PA Opportunity Program, which would make direct payments of up to $2,000 to Pennsylvania households. This program, which is expected to help at least 250,000 households across Pennsylvania, is needed now more than ever to help workers and families recover economically from the pandemic and assist them in affording childcare, education and training, and basic household expenses.”

“The PA Opportunity Program will make our economic recovery from the pandemic more equitable, ensuring we don’t leave Pennsylvanians behind,” State Sen. Tim Kearney said at the event. “The slow growth from the Great Recession taught us we can’t have top-down approaches – we need a bottom-up recovery that gives everyone a piece of the pie.”

Pennsylvania has a Republican-controlled state legislature, and Republicans had resisted Wolf’s proposal when it was first unveiled earlier this year. That opposition remains, according to a Philadelphia news report.

House Republican spokesman Jason Gottesman told the press that the Wolf proposal would be inflationary.

“It was Gov. Wolf who abandoned this idea during budget negotiations to achieve other priorities, and he, like us, knows it rightly belongs on the cutting room floor since it will only lead to increased costs on Pennsylvanians by continuing to drive inflation,” he said.

Wolf, who is finishing up his second term as governor, is term-limited, and Pennsylvania has a competitive governor’s race this fall between Democratic Attorney General Josh Shapiro and Republican State Sen. Doug Mastriano. According to a Fox News poll in late July, Shapiro has a ten-point polling lead over his opponent.