Would Michelle Obama Run for President in 2024? 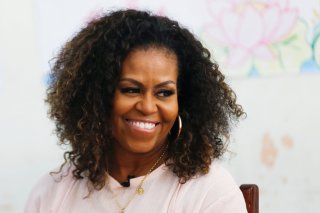 There’s been on and off speculation over whether former first lady Michelle Obama could ever be presumptive Democratic nominee Joe Biden’s running mate on the presidential ticket in November. As one of the most admired women, according to Democrats, the party views her as the strongest, most intellectual vice presidential pick, but that’ll likely never happen.

“No, nope, not going to do it,” “it’s just not for me” and “it’s not something I’m interested in or would ever do. Ever” -- these are all of Obama’s responses to questions posed to her about being Biden’s second-hand-woman to defeat President Donald Trump or if she would ever run for president.

A CBS News poll released in May showed that Obama had 64 percent of Democratic respondents in favor of having her on the ticket. A Michigan state representative even said, “If he puts Michelle on the ticket, everybody turns out.”

Former President Barack Obama said, however, that there’s “zero chance” she would ever run for president.

Despite these statements and growing support from the Democratic party, a lot can change in the next four years. If Biden is elected in November, it’s likely that he won’t run for a second term considering his age. So, depending on the political and economic state of the country from the aftermath of the coronavirus pandemic, is there a chance that Obama would run for president in 2024?

Obama has received an overwhelming amount of support from the rumors of her running for office. An Axios/Survey Monkey poll from last October revealed Obama had a 13-point lead over Trump in a hypothetical presidential election.

However, one of the main reasons that Obama wouldn’t run for president is her due to the fame and lack of privacy that her family has experienced post-presidency.

"What Barack and I talk about that we do miss…is the loss of anonymity," Obama said in an interview on Conan O’Brien’s podcast. "And that's something that most people don't understand, how valuable anonymity is. Being able to blend into your environment, and not be the center of it, but just to observe it…and because I love people so much, I love casual conversations with people.

"While I loved my time in the car alone with Chipotle, I love what you learn standing in a grocery store line and overhearing someone's conversation. You know, watching their interactions with their loved one. Not being the watchee, but watching, and taking that in and understanding life and the observations that come.

"Most of your interaction with your partner is about what you saw, what you experienced over the course of the day. For Barack and I, that's still very limited because we're not able to be exposed in an anonymous way in the world."

Another reason Obama has refused to run is due to her lack of political experience. Obama is chimed for her memorable, compelling speech at the 2016 Democratic National Convention, but the former first lady doesn’t attribute “a good speech” to qualify for the presidency. This is true, but Democrats still view her as the most influential candidate for the party that has a chance at taking Trump out of office.

"What I have said, because I'm not interested in politics, and I have said this before, is that sadly in our country when you put an R or D on you, you immediately alienate most of the country with whatever choice you make," she said.

After acting as the first lady for eight years in the White House, Obama wrote a bestselling memoir titled, “Becoming,” and produced an Oscar-winning documentary. Obama also founded a voter registration initiative that encouraged thousands of citizens to actively vote.

Prior to her experience in the nation’s capital, she worked as an executive at a hospital, where she primarily worked to help minority and underprivileged communities. Her experience in public policy and health sciences could be an asset to tackle the coronavirus

During her time at Harvard Law School, she fought for more diversity within the school and also volunteered to help financially unstable homes.

Obama is one of the most inspiring and professional Democrats in modern history, so perhaps after four more years of Trump or four years of Biden, she might want to lead the country come 2024.