Yes, President Trump Can Invoke the Insurrection Act. Should He? No. 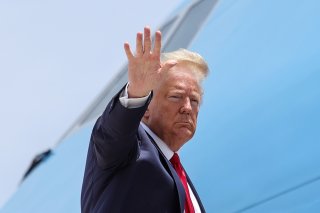 In difficult times like these, our elected leaders must find a way to put aside raw emotion and reject any temptation to make political hay from tragedy. Otherwise, they cannot fully focus on the job of keeping people safe while preserving the rights of citizens.

It’s never easy to assemble a clear picture of a chaotic situation. That task becomes no easier when politicians needlessly muddy the water. Yet that’s what happened last week when 21 U.S. senators sent a letter to Defense Secretary Mark Esper and Joint Chiefs Chairman Gen. Mark Milley expressing “grave” concerns about the danger of the military being “weaponized” to limit the expression of liberty and justice. Yet another senator has proposed adding language to the annual defense authorization bill “preventing the use of military force against American citizens exercising their First Amendment rights.”

Such strident alarmism overlooks the fact that our military leaders swear allegiance to the Constitution, to protect the liberties specified within. It also ignores history: our republic and military have weathered much more serious challenges in the past, without compromising citizens’ rights.

Adding to the turmoil is a torrent of breathless commentary on the presence of Esper and the uniform worn by Milley when they accompanied President Trump on a walk to Lafayette Park after a Rose Garden speech.

But back to the letter. In it, the senators fret that Trump might invoke the Insurrection Act and deploy active military or federalized National Guard units to areas where state and local officials have been unable to preserve law and order. They argue that the conditions which satisfy the requirements of the Insurrection Act, “are not currently met.”

The facts show otherwise. The act allows for the use of the military acting in a federal capacity to address “any insurrection, domestic violence, unlawful combination, or conspiracy, if it—so hinders the execution of the laws of that State, and of the United States within the State, that any part or class of its people is deprived of a right, privilege, immunity, or protection named in the Constitution and secured by law, and the constituted authorities of that State are unable, fail, or refuse to protect that right, privilege, or immunity, or to give that protection.”

Certainly, we’ve seen many U.S. cities suffer an abundance of violence and destruction in recent days. In some cases, the scope of the violence has clearly overwhelmed local law enforcement and National Guard units.

Many law enforcement officers have been injured. Often it’s because they have been simply overmatched. Police forces, after all, are sized for law enforcement, not riot control, which requires much greater numbers.

If the president decides to invoke the Insurrection Act, he would be on a solid legal footing, as were his predecessors when they invoked it to protect Americans from the Ku Klux Klan, violence associated with labor riots, the looting in the aftermath of Hurricane Hugo, and numerous other instances.

A separate and better question is whether it is a good idea to invoke the Insurrection Act. In short, the answer is “no.”

In his June 1 Rose Garden speech on the riots, Trump noted that he would deploy federal military assets only if cities or states refuse “to take the actions that are necessary to defend the life and property of their residents.” He later added “I don’t think we’ll have to.”

The White House has repeatedly emphasized the need for local leaders to take the appropriate action to prevent violence while preserving the rights of citizens to protest. The secretary of defense has stated he does not support invoking the Insurrection Act, suggesting it should only be used as “a matter of last resort.”

Why should the Insurrection Act be only employed as a last resort?

Because active-duty military forces are poorly suited for missions to quell civil unrest. They receive little or no training in the task.

Active combat units are trained to engage and destroy America’s enemies—not restrain crowds.  Active military forces also lack the close ties to the local community that the local police and National Guard enjoy. Finally, using the active military at home puts at risk the great confidence that the American public places in their military.

Gallup consistently reports that, of all institutions, Americans express the greatest amount of confidence, 74%, in the military. That trust should be husbanded; using the military to quell riots does not further that aim.

More puzzling, the senators in their letter, take Milley to task for a supposed appointment to “lead” the Armed Forces response to protests. No such appointment has been made, nor would it be in accordance with law.

Finally, some are aghast that Esper and Milley actually accompanied the president, at his request, on his walk to Lafayette Park, and that Milley wore a camouflage uniform. The most forgiving explanation for their contrived horror is that they do not understand the fundamentals of the U.S. military.

When the president asks defense officials to accompany him on a walk, they go. And Milley already had made plans to visit National Guard troops deployed in the District after the press conference. A four-star general wearing a dress uniform, at night, in the midst of a protest and unrest would have been a novel sight indeed. Thus he was wearing his camouflage fatigues.

These are unsettling and tumultuous times, to say the least. It’s proper to debate whether the use of the Insurrection Act is a proper response. But the country is best served when our leaders focus on the key issues and keep the facts close at hand, rather than toss them aside in the rush to score political points.