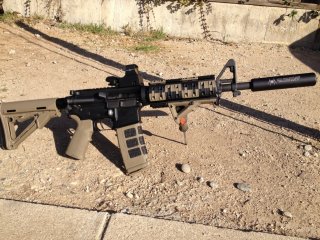 Here’s What You Need to Remember: The “menacing looks” of the AR-15 and similar firearms, along with the public's confusion over semi-automatic firearms versus fully-automatic firearms made the modern sporting rifles an easier target. That even proved successful and led to the Assault Weapon Ban of 1994. Since it expired in 2004, gun control advocates have pushed for its reinstatement.

Supporters of gun control, as well as many liberal politicians, have called for a ban of so-called “assault weapons,” which in turn convinced Americans of the need to limit access to these firearms. The very name of the guns certainly sounds ominous enough, and may convince many to ask the question “why does anyone need a weapon of war?”

That is how these groups plan to win over the public. Consider it a marketing campaign like no other. In this case, it is directed by various groups that have continued to spread misleading “facts” about these firearms.

The Center for American Progress stated on its website, “They are weapons of war that have no place in civilian society.” It added, “Assault weapons are semi-automatic firearms—meaning that they fire a round every time the trigger is pulled—that are capable of accepting a detachable magazine and have another military-style feature such as a pistol grip, a folding stock, or a threaded barrel. Firearm manufacturers, in response to declining sales of handguns, began selling assault rifles in the civilian market in the 1980s as part of a broader effort to create a new market for military-style guns among civilian gun owners.”

The Giffords Law Center to Prevent Gun Violence has an entire page devoted to assault weapons, and offered this chilling tidbit, “Assault weapons are designed for the battlefield and pose a serious public safety risk, making it easier for shooters to kill more people more quickly.” It added, “Assault weapons are a class of semi-automatic firearm specifically designed to kill humans quickly and efficiently.”

To the uninformed those facts could be overwhelming, and they certainly seem to make their case.

Except all of it is misleading to say the least. The hyperbole overstates the danger from this class of firearms by holding back some details.

Neither of those groups mentioned that “modern sporting rifles,” the term preferred by the firearms industry, have the same rate of fire of any other semi-automatic rifle sold to consumers today. The groups failed to note that the range and accuracy of modern sporting rifles is less than many high-powered hunting rifles, and that the guns are safely used by millions of Americans.

Moreover, the argument of “weapons of war” fails as well. Bows and arrows, knives, clubs and slings were all at one time used as weapons. An automobile can be used as intentional killing machine as some tragic terrorist attacks have shown. But using the terms “assault weapons” and “weapons of war” is meant to evoke something that so many only know from movies and video games.

The Characteristics of Assault Weapon

Yet, the various groups in opposition of the Second Amendment have remained vague about what exactly an “assault weapon” may be—in part because their agenda isn't to stop with one class of firearms. Gun control is a war fought in inches not miles.

Consider this very clever marketing—but in this case it is not to sell a product, rather to get it off the market. As the National Rifle Association's Institute for Legislative Action noted, semi-automatic firearms have been under an assault from gun control groups only in the past quarter century and those groups have mislead the public in the process in many ways. This included trying to suggest the “dangerous” class of weapons was only introduced in the 1980s.

“The most popular semi-automatic firearm that gun control supporters call an ‘assault weapon,’ the AR-15, was introduced in 1963,” the NRA-ILA explained.

According to Bruce H. Kobayashi and Joseph E. Olson, in a Stanford Law and Policy Review, “Prior to 1989, the term 'assault weapon' did not exist in the lexicon of firearms. It is a political term, developed by anti-gun publicists to expand the category of ‘assault rifles.’”

The reason is that other efforts to push for gun control largely failed. Throughout the 1970s opponents of the Second Amendment targeted handguns. In fact, it is largely forgotten today, but the Brady Campaign to Prevent Gun Violence was founded in 1974 as the National Council to Control Handguns and operated under the name Handgun Control, Inc. until 2000.

The “menacing looks” of the AR-15 and similar firearms, along with the public's confusion over semi-automatic firearms versus fully-automatic firearms made the modern sporting rifles an easier target. That even proved successful and led to the Assault Weapon Ban of 1994. Since it expired in 2004, gun control advocates have pushed for its reinstatement.

That is because if semi-automatic rifles could be banned, wouldn't it be that much easier to then move back to banning semi-automatic and eventually all handguns.