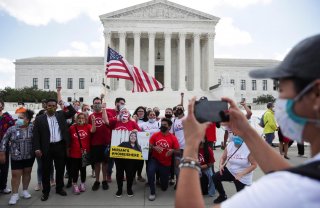 The Supreme Court did more than just “save” the Deferred Action for Childhood Arrivals (DACA) program for immigrants brought to the United States as children. Its decision will also allow about 130,000 new applicants to apply to the program for the first time because it affirmed a lower court decision that prohibited the government from denying new applicants.

While most court decisions only affected the second action, the D.C. district court found that the first action was also illegal, stating that if DHS failed to issue a new memo outlining its reasons for ending DACA—which the Supreme Court ruled it never did—“the agency will be required to resume accepting initial DACA applications and applications for advanced parole.”

Figure 1 shows how many initial DACA applications there were each year since 2015. There was a steep decline in 2017 when President Trump took office, and many Dreamers felt that he would use their information to arrest them—which he did try to do. But nonetheless, almost 46,000 applicants received DACA in 2017 before the order cancelling new applications. If this trend could have continued over the next three years, about 132,000 additional initial applicants would have been accepted.

The reason that all Dreamers didn’t apply for DACA under President Obama is that he generally required that they be above the age of 15 to apply. This means that every year tens of thousands of young immigrants without legal status “age in” to eligibility for DACA. President Trump blocked them from applying for DACA during the last two years and nine months, but when the Supreme Court affirmed the D.C. district court’s decision, it allowed the youngest Dreamers to apply.

It’s also worth noting that the D.C. district court decision also affected “advanced parole,” which is advanced permission to travel and reenter the United States. Advanced parole allows Dreamers to travel for business or to see relatives abroad, but importantly, it also allows them to establish a record of legal entries to the United States. This matters because if someone has not entered the country legally, they cannot apply for permanent residence status based on marriage to a U.S. citizen, employer sponsorship, or other grounds.

In any case, this Supreme Court decision is more meaningful than just preserving the status quo, and that’s a good thing for Dreamers, their families, and the Americans who work with them or depend on them.