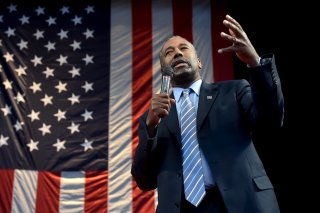 These are difficult times, and Americans are looking for guidance on how to make sense of the most divisive issues we face. When it comes to race in America, Heritage President Kay C. James says that conservatives should be leading the civil rights movement.

That’s why The Daily Signal reached out to African American conservatives to ask why they are conservative. Here are their responses.

My political conservatism is an effect or consequence, not a cause.

I am an American patriot, informed by a deep appreciation of the human significance of the advance in human affairs occasioned by the founding of the United States. For the first time in human history, the idea that mankind in general was capable of self-government had been realized.

Moreover, the fulfillment of the promises attending that realization have been made manifest in the consistent progress of civilization in the United States, in which the power of the individual and the value of self-agency, informed by the security of religious conviction, have steadily reinforced real material progress and the opportunity for moral progress.

For those reasons, it is a matter of prudent judgment that one’s political exertions should ever be careful to reinforce and not to undermine the foundations of the hopes invested in the political constitution of this nation.

The United States was formed as a lamp unto the world, and whatever undermines the power of the United States to perform that role constitutes an impediment to human happiness.

If it is conservative to wish to preserve the “last best hope of man” on earth, then such conservatism is the effect of devotion to liberty. No one could do otherwise, if guided by good sense and a due appreciation of the values of faith, freedom, and responsibility.

W. B. Allen, Ph.D., is the chief operating officer of UrbanCURE.

2. Brian Bledsoe: Most Fair for All

I’m a conservative because the most innocent among us should be given the chance to live.

I’m a conservative because you shouldn’t be punished for being successful.

I’m a conservative because securing our borders against those who seek to come here illegally should be as commonsensical as securing our residences.

I’m a conservative because we need to defend the Second Amendment more than ever from the constant and vicious attack on our right to bear arms.

I’m a conservative because speech should be free whether I agree with it or not.

I’m a conservative because I stand against the deceptive allure of an all-controlling government by way of socialism, which threatens everything that made this country great.

I’m a conservative because we should remain forever vigilant in advocating limited government.

Leftists will argue that being conservative goes against what they perceive is in my self-interest. I’m a conservative because the principles of conservatism are the most effective, realistic, and fair for all—regardless of individual outcome.

Brian Bledsoe is a Heritage Action Sentinel from Texas.

3. The Rev. Arnold M. Culbreath: Not Sellouts, but Solutions

We are living in turbulent times. Racial tensions run high, and intensified feelings, conversations, shouts, and pressure reverberate across the land. And in the midst of all this, a wide variety of perspectives abound.

Being Black in America is not easy. However, I remain hopeful and work to make America better every day. As a pastor, Army veteran, business owner, and national ministry leader, I strive to model what being a Christian, socially conscientious, Black man in America looks like, while frequently facing racism and exclusion in the process.

In spite of the odds, I have labored long and participated in initiatives that help hopeless and hurting people, and programming that moves past rhetoric to get real resources to people in need. Things like after-school feeding programs, grocery giveaways, the First Step Act, opportunity zones, free help to women in crisis pregnancies, and more.

These principles need not be defined or confined by polarizing labels such as left or right, conservative or liberal. The question is: Does an initiative strengthen and lift impoverished and disenfranchised people and communities that need it most?

If so, collaboration is desperately needed to serve those ravished by a pandemic, shaken by injustices such as the brutal killing of George Floyd and many others at the hands of police, racial upheaval, and socio-economic disparities, and we need it now.

In order for this to occur, name-calling and marginalizing of viewpoints must stop. It’s much more helpful to stop viewing me and others like me as “Uncle Toms,” but as fellow team members. Not as sellouts, but as solutions to the problems.

This is our country, and our world, so let’s work to make it the absolute best that we can together.

The Rev. Arnold M. Culbreath is the director of ministry engagement at the Douglass Leadership Institute.

If anyone is willing to step away from the noise and cacophonic discourse that now compromise political discussion, we can begin to see that conservatism is not just an opposing or competing ideology. It is a human imperative wrought in the will and psyche of every reasonable person.

I am a conservative because personal initiative favors personal economic freedom. I oppose excessive government control of business and the subversion of the traditional family structure. I fully endorse and favor a free-market economy and the rule of law.

The values inherent in the individualism of my grandmother that spawned four generations of conservative thought and action embodied the sentiment that “all are created equal,” and that government does not bestow anything on anyone.

The entrepreneurship, individual effort, and hard work that made all of my grandmother’s efforts and her life rich and full have influenced and spawned generational success. This makes me a “reasonable man,” a reasonable person.

The family is a microcosm of what works best for all of mankind. We realize that God created us male and female, that we are to train up our children and equip them with self-confidence, discipline, and respect for all that is good and right.

This fortifies our society with reasonable people who think critically about their impact and legacy for their families, their fellow citizens, and their society.

Only this actually works for all concerned.

Michael E. Kerridge is a Heritage Action Sentinel from Florida.

5. Liz Matory: From Liberal to Liberated

My greatest desire is for more Americans to remember their conservative roots. Five years ago, I feared conservatives. I thought they were “the bad guys” and that “they” didn’t care about Black people.

Like so many Washingtonians and women of color, I was a liberal by default and never questioned being one. I just knew that I wasn’t supposed to be a conservative.

I became an independent voter in 2015. I had become extremely disenchanted and disheartened with the status quo. If anything, I was desperate to find solutions that would really make a difference.

It was only then when I had the guts to read Barry Goldwater’s “The Conscience of a Conservative” and Arthur Brooks’ “The Conservative Heart.” Through all of my schooling and political activism, I admit I never really knew what conservatives believed. I only knew they were the “enemy.”

If you had told me just five years ago that I would be a conservative, like a Bible, pro-life, and guns conservative, I would not have believed you. But I am. A very proud one.

Everything makes sense now, especially when it comes to the issues that still face “Black America.” We are actually conservatives, and have been since the beginning. It is as if our heritage was purposefully obscured to ensure we would not advance. We need only to flip the switch to see the light.

Faith. Family. Freedoms. Free enterprise. There is no color to it. Just truth.

Liz Matory is the author of “Born Again Republican” and “Becoming Born Again.”

6. Lenny McAllister: Advancing Freedom for All

As America has taught the world over our modern history, the power of free markets and conservative principles has broken down systems of oppression from Montgomery to Mumbai.

These principles have lifted many in Latin America and Asia out of poverty. They forced integration of public facilities through boycotts. They continue to push for life-enhancing innovations in technology, education, and retail.

A lifestyle that allows one to embrace one’s potential, explore one’s destiny, and self-determine one’s successes is a lifestyle that extols the American Dream.

With our conservative principles, we grasp both the legality and sentiment of the Constitution, the founding vision for our nation, and the power of perseverance in America.

Visionary conservatives leading within modern America take the best of our foundation and apply contemporary lessons of courage and tact to pursue a more perfect union.

We put feelings aside at a time when emotions are high, yet values must prevail.