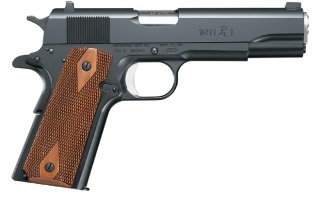 Here's What You Need To Remember: For more than a hundred years, one weapon has travelled with American troops into almost every crisis, hot spot and war the United States has participated in. Developed as a response to Washington’s first overseas insurgency, the 1911 pistol still accompanies U.S. forces today around the world.

The 1911 semiautomatic pistol was invented by John Moses Browning, one of the most successful—and some would say, legendary—inventors of firearms who ever lived. Between 1879 and 1926 the prolific Browning invented some of the most successful firearms ever made, including the 1911 pistol, the Browning Hi-Power pistol, the Browning Automatic Rifle, and the M2 Browning heavy machine gun. Invented in 1921, the M2 still serves as the standard heavy machine gun of the U.S. armed forces.