In the 1930s Nations were Experimenting with Radio-Controlled Tanks 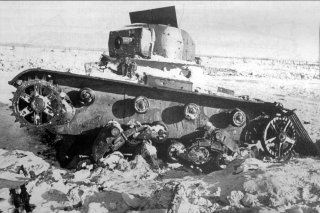 Key point: Despite being at the cutting edge of technology, World War II–era drones were only effective in highly specialized circumstances, not ideal for the fast-paced ground warfare of the conflict. The Soviet teletanks were an ambitious attempt to practice the sort of remote-control drone warfare that is rapidly becoming a reality today.
On April 18, Moscow announced that it would feature its Uran-9 robot-tanks in its military parade celebrating the seventy-third anniversary of the defeat of Nazi Germany. The compact Uran-9 bristles with a 30mm cannon and anti-tank missiles—and it is of course, unmanned. The defense ministry also periodically insists that it will develop an unmanned version of its new T-14 Armata main battle tank.

Curiously, Moscow has been developing robot-tanks for nearly ninety years. The Soviet Union’s first tanks were French FT-17 light tanks captured from White Russian forces. In 1929, an FT-17 was rigged with a simple MOST-1 radio system, allowing it to follow three simple commands—stop, turn left or turn right—while crawling forward at 2.5 miles per hour. Soviet technicians tried to do one better by installing a more sophisticated command system on seven T-18 tanks, a domestically built version of the FT-17 with a new turret.