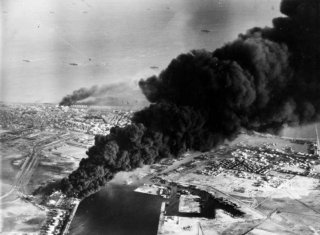 Here's What You Need to Remember: The damage to the West was immense. U.S.-British relations were damaged, and Soviet prestige enhanced.

The crisis began over who just owned the Suez Canal, the gateway between Europe and Asia. In July 1956, Egyptian president Gamal Abdel Nasser announced he would nationalize the canal, which was controlled still by European shareholders even after Egypt achieved independence from Britain (the same situation would later apply to the United States and the Panama Canal). Nasser’s decision was prompted by the cutoff of American funding for the massive Aswan Dam after Nasser had signed a huge arms deal with the Soviet bloc.

Or two empires. In 1956, the sun had already set on the British and French imperia, even if they couldn’t admit it to themselves. Battered and bankrupted by World War II, these former great powers were still coming to grips with the new reality of becoming supporting actors on a global stage dominated by America and Russia.

France, Britain, and Israel eventually hatched a plan—the Protocol of Sèvres—breathtaking in its cynicism. First, Israel would invade the Egyptian-held Sinai Peninsula. Then, ostensibly to protect the Suez Canal, Britain and France would issue an ultimatum for Israel and Egypt to withdraw from the Canal Zone. When Egypt predictably refused, Anglo-French forces would invade and take over the canal. Nasser would be humiliated and overthrown, European control over the Suez Canal restored, and the good old days of nineteenth-century imperialism would be restored.

This gave Britain and France an excuse to issue their ultimatum. When Egypt ignored it, Operation Musketeer (Opération Mousquetaire to the French) commenced. A better name would have been Operation Mouseketeer because the whole operation was Mickey Mouse. As pointed out by President Eisenhower, who knew more than most about planning invasions, the Anglo-French didn’t have a lot of troops compared to D-Day and other World War II landings. Some eighty thousand troops were involved, as well as more than two hundred warships (including five British and two French aircraft carriers) and hundreds of aircraft. While some of the British troops were unenthusiastic conscripts who couldn’t figure out why they were going to Egypt, the landings were spearheaded by elite British and French paratroopers and commandos.

However, what really mattered was the reaction of the superpowers. Soviet premier Nikolai Bulganin warned that the Soviet Union was ready to fire nuclear-armed ballistic missiles at Britain, France, and Israel unless those nations withdrew. This, too, was a deception: the Soviet Union’s ICBM force was mostly propaganda at this time. Not to mention hypocritical, given that just a month before, Soviet tanks had brutally suppressed Hungarian rebels in Budapest.

The damage to the West was immense. U.S.-British relations were damaged, and Soviet prestige enhanced. Eden resigned as prime minister, while the British resigned themselves to no longer acting as an imperial power. The West Germans noted that the Soviets had threatened to attack Western Europe, and the United States had not protested. Israel grudgingly withdrew and began preparing for the next war (which would come in 1967). Instead of being overthrown, Nasser became the hero of the Arab world; his comeuppance would also come in 1967.