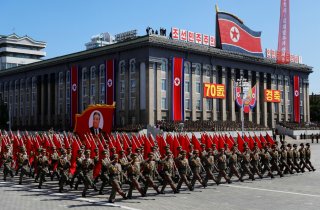 Here's What You Need to Remember: The CIA assessed that Kim Il-sung had embarked on his guerrilla adventure in the latter half of the 1960s for a variety of reasons, many having to do with anxiety and opportunism related to the U.S. and South Korean participation in the Vietnam war.

In the late spring of 1969, a 75-ton North Korean speed boat hurtled through the Yellow Sea off the western coast of South Korea on a secret mission. Its 15-man crew on board was supposed to pick up an agent operating in the South on behalf of Pyongyang’s spy services and take him back north.

It was an operation similar to many others that North Korean intelligence had carried out over the past two years as it flooded its enemy, the Republic of Korea, with infiltrators.

The boat’s crew came ashore on at midnight Heuksan Island looking for its agent. Instead, they found South Korean security forces and a firefight waiting for them.

All 15 were killed in the shootout.

The operation’s failure was no accident. South Korean intelligence had laid what the CIA later called “a carefully prepared trap” for the exfiltration team. A month prior, the Korean Central Intelligence Agency, or KCIA, had captured the agent the team was supposed to pick up, turned him into a double agent and used him as bait.

Since the fall of 1966, North Korea had waged a guerrilla campaign against South Korea in an attempt to needle the South Korean and American militaries and foment popular unrest against the government of Pres. Park Chung-hee. But South Korea was getting better at finding and disrupting Pyongyang’s agents. And North Korea’s floundering war effort was coming to a close.

The remaining years of the 1960s would see more bouts of violence from North Korean forces. The 124th Army Unit which had tried to kill Park would try one last, desperate guerrilla raid inside the ROK. And North Korean forces would once again attack Americans, shooting down a Navy EC-121 spy plane.

But by the beginning of the 1970s, it was clear that Kim Il-sung’s guerrilla campaign had come to a close, having ended in failure.

The assassins North Korea sent to kill the South Korean president came perilously close to the presidential residence, but their mission was a flop. Park was still alive after the raid and the South Korean people rallied around him afterwards in revulsion at the attempt, rather than rising up against his government.

In a 1970 National Intelligence Estimate, the CIA assessed that North Korea had mostly given up on the campaign of dramatic raids and terrorist attacks as means of undermining the ROK. Violence at the border had plummeted and North Korea was sending infiltrators for political espionage in the ROK rather than guerrilla warfare.

South Korea had responded early to the uptick in violence from North Korea that began in the fall of 1966, beefing up its counter-infiltration capabilities. The Korean National Police grew into a 40,000-strong force in 1967 and added new resources to its coastal patrol unit designed to catch seaborne infiltrators.

After the Blue House raid, the United States again topped up aid to the South Korean military with an additional $100 million supplemental requested by President Lyndon Johnson and approved by Congress.

Cooperation from ordinary South Korean civilians was critical for the effort. Pyongyang was adept at getting spies and commandos into the ROK, but the lack of a political base for the infiltrators gave them little to work with once there.

Instead, South Koreans often reported the presence of infiltrators to the police, as they had in the days before the Blue House raid. The country was deeply anti-communist at the time, but ROK officials also incentivized their cooperation with rewards for information.

Tipsters could get 200,000 won — $660 in late 1960s U.S. dollars — for information leading to the successful capture of an agent, dead or alive. They could also claim a 50-percent cut of any money agents had on them once captured.

Intelligence on what was going on above the demilitarized zone, however, could be hard to come by as the North had buttoned-up in preparation for its low-intensity war with the ROK. By 1967, American spies found that “clandestine and defector reporting on North Korean military activities is greatly diminished due to tightened internal security.”

The intelligence community hadn’t been paying as much attention to reconnaissance coverage of North Korea before the guerrilla campaign because the country’s hadn’t been “an overly active area” over the past few years. The result was “a growing deficit in current knowledge of the North Korean military posture,” according to the National Foreign Intelligence Board.

To remedy that deficit, the United States tasked an A-12 Oxcart, the CIA’s variant of the Air Force’s SR-71 Blackbird spy plane, to fly missions over North Korea from Kadena Air Base in Okinawa, Japan as part of the Agency’s Black Shield program.

There were also changes under way back in North Korea after the dramatic opening to 1968.

North Korean officials were already showing signs of impatience with the progress of the covert campaign in the South the year before, leading Kim Il-sung to fire Yi Hyo-sun, the head of the Korean Workers’ Party Liaison Department — the agency responsible running spies in the South.

But after the disastrous Blue House raid, more heads would roll. From late 1968 through early 1969, Kim shook up the leadership of the Ministry of Defense and Korean People’s Army, sacking Defense Minister Kim Chang-pong and Army Chief of Staff Gen. Choe Kwang. In their place, he put in two committed loyalists, Gen. Choe-hyon and Gen. O Chin-u.

Both men had long guerrilla pedigrees.

O Chin-u had fought against the Japanese alongside Kim as a member of the 88th Sniper Brigade during and had helped churn out troops trained in guerrilla tactics as commander of the Hoeryong Cadres School before the Korean War. During the conflict he commanded the 766th Independent Unit that would later serve as a model for the 124th Army Unit that carried out the Blue House raid.

Choe Hyon, too, was a veteran of the 88th and the CIA described him as a “leading unconventional warfare expert” who had led the Military Liberation College, another school for the training the North’s infiltrators.

There were vague hints of discontent within North Korea’s leadership towards Kim’s guerrilla policy seeping out of official media.

An oddly defensive April 1969 article appeared in state news praising Kim’s military leadership and criticizing “enemies at home and abroad” who would doubt the so-called Great Leader’s authority on foreign policy. To the CIA, it seemed as though the North Korean leader was pushing back against uncertainty about the wisdom of his guerilla campaign.

But the purges came in the context of a broader reorganization of North Korean leadership and society that had been underway as Kim Il-sung tried to consolidate his hold over the country.

Since the end of the Korean War, Kim had been purging anyone who could pose a threat to his leadership of the country. North Korean officials whom he viewed as too close to the twin communist powers of China and the Soviet Union were first on the chopping block followed by South Korean communists who had taken up residence in North Korea during the Korean War.

By the late 1960s, Kim started to take aim at a faction within the North Korean military dubbed the “partisan generals” whom he’d brought to power and put in charge of his covert war. The clique was comprised of veterans of the resistance against Imperial Japan during the World War II — men such as Kim Chang-pong and Gen. Choe Kwang who had fought alongside the North Korean leader in his days.

As his guerilla campaign looked increasingly like a blunder, Kim began to ditch some of the partisan generals. “Kim picked out a group of people that he was already trying to get rid of. He took down scapegoats and they were held responsible” says Michael Madden, an expert on North Korean leadership and a visiting scholar at the U.S. Korea Institute at Johns Hopkins University.

“It was also a matter of migrating control for these operations from the military and from these partisan generals to civilian intelligence people — with the giant caveat that everyone in North Korea is in the military in some form or another,” Madden adds.

After the traumatic opening to 1968, South Korea enjoyed a period of calm throughout the early infiltration season as violence and guerilla activity dipped.

In late Oct. 1968, 120 special operations troops from the North’s 124th Army Unit came ashore at Ulchin on the eastern coast of the ROK, landing at a spot near where the 766th Independent Unit had carried out a rear-area operation during the Korean War.

When Kim Il-sung Could Teleport: How Disinformation On North Korea Runs Rampant