The 1962 Sino-Indian War Shook Asia to Its Core 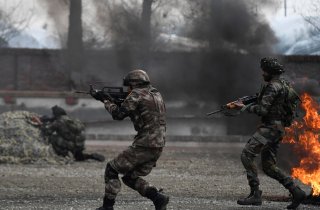 Here's What You Need to Remember: In an important sense, the issues now surrounding the confrontation on the Doklam Plateau are essentially the same as those that the two countries left unresolved in 1962. The balance of power may have changed, however, as has the geopolitical situation.

In 1962, the world’s two most populous countries went to war against one another in a pair of remote, mountainous border regions. In less than a month, China dealt India a devastating defeat, driving Indian forces back on all fronts. Along with breaking hopes of political solidarity in the developing world, the war helped structure the politics of East and Southeast Asia for generations. Even today, as Indian and Chinese forces square off on the Doklam Plateau, the legacy of 1962 resonates in both countries.

While both the Chinese and Indian governments were relatively new (the People’s Republic of China was declared in Beijing in 1949, two years after India won its independence), the armed forces that would fight the war could not have been more different.

Robert Farley, a frequent contributor to TNI, is author of The Battleship Book. He serves as a Senior Lecturer at the Patterson School of Diplomacy and International Commerce at the University of Kentucky. His work includes military doctrine, national security, and maritime affairs. He blogs at Lawyers, Guns and Money and Information Dissemination and The Diplomat. This first appeared in 2017.