In 1967, the Zuni Rocket Became Every Navy Sailor’s Nightmare 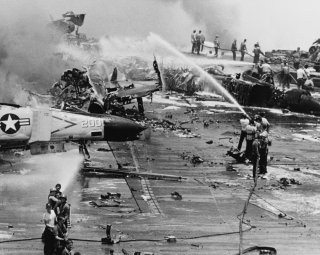 Here's What You Need to Remember: Twisted and scarred by the blaze, with fifteen of her jets reduced to smoldering wrecks, the Enterprise limped back into Pearl Harbor, where she underwent fifty-one days of repairs costing $126 million ($866 million in 2017 dollars). The venerable carrier went on to serve forty-three more years before being retired in 2012.

Sébastien Roblin holds a master’s degree in conflict resolution from Georgetown University and served as a university instructor for the Peace Corps in China. He has also worked in education, editing and refugee resettlement in France and the United States. He currently writes on security and military history for War Is Boring. (This first appeared in September 2017.)