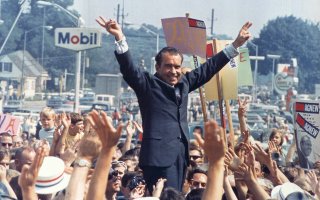 In this year’s presidential election, terms such as “law and order” and “the silent majority” have been heard fairly often from Donald Trump and some of his supporters.

Those phrases hark back to an earlier presidential election, which took place in 1968. That one was a three-way affair involving former Vice President Richard Nixon, a Republican; incumbent Vice President Hubert Humphrey, a Democrat; and the third-party candidacy of a Southern segregationist, Alabama Gov. George Wallace.

As in 2020, the presidential election in 1968 took place amid urban unrest, rising violent crime, racial tension, clashes between protesters and the police, and a high degree of political polarization.

Despite these parallels, what really stands out when one looks back to the 1968 election and compares it with this year’s are the differences, not the similarities.

Although the events of 1968 such as urban riots, Martin Luther King Jr.‘s assassination, and the intense fighting in Vietnam were polarizing, the two major parties stood much closer together on most issues than they do now.

In 1968, the Democrats as a whole were a more centrist party, whose ranks included lots of conservative white Southerners in Congress as well as in state and local offices. These Dixiecrats, as they were known, tended to counterbalance the influence of the party’s Northern liberals.

The Republican Party was also markedly more centrist then, with a lot of moderately conservative voters and lawmakers who restrained the GOP’s so-called “movement conservative” wing.

The much more centrist orientation of the two-party system, then, can also be seen in the presidential candidates the Democrats and the Republicans chose in 1968. Both were quintessentially establishment figures.

The Democratic candidate, Hubert Humphrey, was in most respects a traditional New Deal liberal, the kind of FDR-inspired, pro-union, anti-Communist center leftist whose formative political experience was the Great Depression.

GOP candidate Richard Nixon was best known for having served as the No. 2 man in the moderately conservative Eisenhower administration. Although significantly different, those mainstream New Deal liberal and Eisenhower Republican viewpoints were nevertheless closer to each other than the forms of liberalism and conservatism that are dominant in the Democratic and Republican parties today.

The independent candidate that year, George Wallace, was a disruptive and polarizing figure. He ultimately finished a distant third in the race because his running mate, General Curtis LeMay, turned off voters with his very hawkish rhetoric about the Vietnam War.

But the Wallace candidacy did affect the election, because his popularity in the South (where he won five states) raised the possibility that no candidate would achieve an Electoral College majority, which would have thrown the election into the U.S. House of Representatives.

The Wallace candidacy also made a difference by contributing to the ongoing erosion in support for the Democratic Party among white Southerners, a trend that eventually transformed American politics.

In 1968, though, Wallace’s main effect on the race was to attract votes that would have gone to Nixon, who consequently won with only a plurality - 43% - of the national popular vote.

This three-way kind of contest and its consequences are very different from this year’s presidential race, which is essentially a two-person race.

Old appeals may not work

Some of the most important issues in 1968 were also profoundly different from those of today.

That year, sharply rising inflation and the Vietnam War were among the most influential factors in deciding the outcome. That’s in marked contrast to 2020, when inflation is very low and no foreign policy issue has anything like the weight that Vietnam did in 1968.

And some of the leading issues in 2020, such as the coronavirus pandemic, climate change, health care, high unemployment, immigration, trade and the decline of the middle class (which hadn’t yet happened in 1968), were absent 52 years ago.

Even 2020’s protests against racial inequality and police brutality, in some ways similar to the ones in 1968, are also different because at that time the focus was on resistance to the old Jim Crow segregation system, not the less overtly visible systemic racism rooted in economic inequality and mass incarceration.

If 1968 and 2020 are such different election years, why have phrases associated with the first tended to crop up in President Trump’s campaign speeches?

Trump, who turned 22 in 1968, is old enough to remember the 1968 presidential race, which was the first one in which he could vote. He no doubt also remembers the appeal of Nixon’s “law and order” and “silent majority” themes among working-class and lower-middle-class white voters in the outer boroughs of New York City, where he grew up. Although many of those voters were historically more oriented toward voting for Democrats, rising crime and urban rioting increased fears of Black people among those kinds of voters. Nixon’s code phrases helped to drive them toward voting for Republicans.

Trump appears to be trying to use that same approach this time, but given how different conditions are in 2020 than they were in 1968, it’s not clear that Trump’s tactics will have anything like the traction they did when Nixon used them.