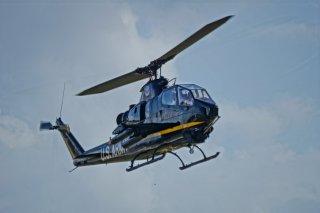 Here's What You Need to Remember: Perhaps North Korea believed the “imperialists” were so exhausted from the Vietnam War that they wouldn’t dare go to war in Korea. Perhaps North Korea reckoned that it could get away with killing U.S. soldiers without retaliation, as it had after seizing the spy ship USS Pueblo in 1968, and shooting down an EC-121 spy plane in 1969. Or, perhaps a junior officer, raised in North Korea’s hypermartial atmosphere, simply went mad.

The American and South Korean soldiers went off to chop down a poplar tree.

Instead, they were chopped into pieces by ax-wielding North Korean soldiers. And what should have been a case of routine landscaping nearly triggered a second Korean War.

Thousands of lives could have been lost, and the Korean peninsula devastated as it had been in 1950. All because of a tree, a hot-tempered North Korean lieutenant and the most heavily armed border zone on Earth.

The tale begins on the morning of August 18, 1976, when a United Nations Command work party entered the Joint Security Area in the Demilitarized Zone between North and South Korea. Their mission was to trim the branches of a poplar tree that was obscuring the view of UNC observers monitoring the Joint Security Area.

The five Korean Service Corps civilian workers were escorted by eleven American and South Korean soldiers and two U.S. Army officers, Capt. Arthur Bonifas and 1st Lt. Mark Barrett. Bonifas and Barrett were unarmed due to limits on armed personnel in the area. Yet despite some previous tense encounters with North Korean guards, there was no reason to expect trouble. The tree-trimming had already been scheduled with North Korean representatives.

What happened next, according to the U.S. account, is that a group of fifteen North Korean soldiers arrived, led by a North Korean lieutenant named Pak Chul who had proved belligerent on previous occasions. After watching the trimming for a while, Pak then warned the work party to stop because the tree allegedly had been planted by North Korea’s Kim Il-sung. After Bonifas ordered the work to continue, a North Korean truck arrived with twenty more guards.

At a signal by Pak, they jumped the work party. Some of the attackers grabbed axes that the workers had left on the ground. The fight lasted perhaps thirty seconds, but that was enough time for most of the UNC guards to be wounded. Bonifas was beset by several North Koreans and beaten to death. Barrett disappeared, but UNC personnel observed that a North Korean guard would take an ax and disappear into a depression, before coming out a few minutes later and handing the ax to another guard, who would then go down. Eventually realizing what was happening, UNC soldiers went to the depression and found Barrett badly wounded but alive. He died on the way to hospital.

Pyongyang quickly denounced the incident as a provocation by American imperialist “hoodlums.” “Four persons from our side went to the spot to warn them not to continue the work without our consent,” said a North Korean press release. “Against our persuasion, they attacked our guards en masse and committed a serious provocative act of beating our men, wielding murderous weapons and depending on the fact that they outnumbered us.”

Perhaps North Korea believed the “imperialists” were so exhausted from the Vietnam War that they wouldn’t dare go to war in Korea. Perhaps North Korea reckoned that it could get away with killing U.S. soldiers without retaliation, as it had after seizing the spy ship USS Pueblo in 1968, and shooting down an EC-121 spy plane in 1969. Or, perhaps a junior officer, raised in North Korea’s hypermartial atmosphere, simply went mad.

Either way, this time there were consequences. President Gerald Ford authorized Operation Paul Bunyan, a show of force intended to show North Korea that America could only be pushed so far. On August 21, just three days after the murders, a team of sixteen U.S. Army engineers went back to the poplar, armed with chainsaws. They were escorted by sixty Joint Security Force soldiers armed with sidearms and ax handles.

Hardly an intimidating display of strength. But what stunned the North Korean guards was the line of AH-1 Cobra attack helicopters hovering on the South Korean side of the border. Behind the Cobras were B-52s escorted by U.S. and South Korean F-4 and F-5 fighters. On airfields in South Korea were F-111 strike jets supported by more fighters, while a U.S. aircraft carrier had moved into the area. On the ground and ready to support the new work party were U.S. infantry, armor and artillery.

Meanwhile, the ever-tough South Koreans sprang their own surprise. A sixty-four-man South Korean special forces team supported the work party. They were supposed to be unarmed, relying on their tae kwon do skills if the North Koreans attacked. Understandably, the commandos chose gun fu instead of kung fu: once their truck had crossed into the Joint Security Area, they pulled out hidden guns and grenade launchers. Some had Claymore mines strapped to their chest, detonators clutched in their hands, as they dared the North Koreans to attack.

A young American soldier who escorted the second work party recalled the scene:

There I am, close to two million people stretched all along the DMZ and who knows how many tens of thousands within probably three miles of where we are at, nukes in the air (aboard B-52’s), who knows how much artillery from both sides concentrated on our location, crazy guys with mines on their chest yelling at the North Koreans to come on over, KPA [North Korean soldiers] less than 100 meters away with machineguns and AK-47’s trained on us, and me and my buddies are standing around with axe handles and .45’s. I’m looking north at all of the various North Korean bunkers I know about, the ones pointed out to me, and the ones I’ve watched being built during the last year, expecting at any moment I’ll see a puff of smoke and flame, the signal that their artillery has fired. It’s almost laughable, probably would be in a movie, but all I’m thinking now is that I hope I can take a couple (KPA) with me.

The North Korean response was to do . . . nothing. The branches of the poplar tree came down. The work party returned home without incident.

On the other hand, the message was sent. Push America too far at your own peril.

Whether North Korea still remembers that message remains to be seen.