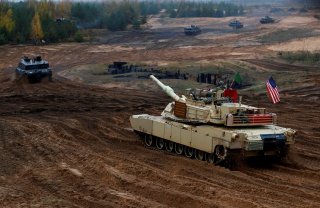 Here's What You Need To Remember: In “Seven Days to the Rhine,” Soviet nuclear forces would destroy Hamburg, Dusseldorf, Cologne, Frankfurt, Stuttgart, Munich, and the West German capital of Bonn. NATO headquarters in Brussels would be annihilated, as would the Belgian port of Antwerp.

Last month in the National Interest we discussed NATO’s plan for World War III in Europe. The scenario, set in the late 1980s, assumed that the forces of the Soviet Union and the rest of the Warsaw Pact—namely East Germany, Poland, Czechoslovakia, and Hungary—steamrollered West Germany to defeat NATO. The plan assumed the western alliance would defend as far forward as possible while avoiding the use of tactical nuclear weapons.

But what about the Warsaw Pact? After the Cold War ended, the Polish government made public classified Soviet documents that revealed the likely war plan. The plan, known as “Seven Days to the Rhine,” was the basis of the 1979 military exercise that assumed NATO as the aggressor, having nuked a series of twenty-five targets in Poland, including Warsaw and the port of Gdansk. The cover story of countering aggression was a mere fig leaf for the true nature of the anticipated conflict: a bolt-from-the-blue Soviet attack against NATO.

By the 1980s NATO had shifted to a “Flexible Response” nuclear doctrine: the alliance was prepared to use nuclear weapons but would seek to win the war conventionally. This is in stark contrast to the Warsaw Pact, which saw their use as inevitable and planned to use them from the outset. Such early would confer the pact an enormous strategic advantage over NATO.

In “Seven Days to the Rhine,” Soviet nuclear forces would destroy Hamburg, Dusseldorf, Cologne, Frankfurt, Stuttgart, Munich, and the West German capital of Bonn. NATO headquarters in Brussels would be annihilated, as would the Belgian port of Antwerp. The Dutch capital and port of Amsterdam would also be destroyed. Denmark would suffer two nuclear strikes.

The result would be a headless NATO and the destruction or demoralization of civilian governments in West Germany, Belgium, the Netherlands, and Denmark—precisely the countries likely to be occupied at the end of the seven days. The elimination of the port cities of Hamburg, Antwerp, and Amsterdam would severely curtail NATO’s ability to flow reinforcements from the United Kingdom and North America.

Curiously, France and the United Kingdom were to be spared nuclear strikes. This is probably because both had independent nuclear arsenals not tied to the United States. The United States might have hesitated to retaliate for fear of escalating to strategic nuclear warfare, but for France and the UK the European atomic battlefield was much closer and the dividing line between tactical and strategic was not so clear-cut. The Soviet leadership probably had no intention of continuing war with either one on the eighth day.

After the Warsaw Pact had launched nuclear strikes, conventional forces would be sent in to conquer. Seven Days to the Rhine assumed a radioactive zone that used to be called Poland, dividing the Soviet Union from its forces in East Germany, Czechoslovakia, and Hungary. Those forces, along with their East German, Czechoslovak, and Hungarian counterparts, would need to suffice to carry out the attack. While Polish forces were theoretically available, by 1979 the Soviets would have reason to suspect their political reliability.

Leading the spearhead aimed at the heart of NATO would be the Group of Soviet Forces in Germany. The GSFG was comprised of five armies, each with three or four tanks and motor-rifle (mechanized infantry) divisions.

This combined northern force of eighteen combat divisions, plus artillery, air assault, and special forces, would smash into the combined Danish, Dutch, West German, British, and Belgian forces facing them. The battle would take place on the so-called North German Plain, a stretch of relatively flat, the rolling country from the inner German border to the Low Countries. This was considered the quickest, most direct way to knock out the largest number of NATO countries.

This southern force of nineteen divisions would enjoy the shortest route to the Rhine River, only 120 miles as the crow flies, but faced serious military and geographical obstacles. The ten West German and American divisions facing them were among the best-equipped in NATO, and the correlation of forces, to use a Soviet Army phrase, did not favor the attacker. The terrain was a mixture of hills, mountains, and connecting valleys, all of which strongly favored the defender.

In the meantime, Soviet airborne and air assault forces would fan out and occupy key bridges, particularly over the Weser and Rhine Rivers. Seizing river crossings would be essential for maintaining the momentum of the ground offensive. Airfields, military headquarters, and known alternate seats of government would also be targets. Soviet spetsnaz special forces would also target NATO tactical nuclear weapons, seeking to neutralize Pershing II, Ground Launched Cruise Missiles, and nuclear gravity bombs before they could be used.

Warsaw Pact aviation was to be very busy. Assuming a short seven-day war, there would not be time to execute a proper air-defense suppression campaign. Much of NATO’s leadership would have been killed during the nuclear attacks, and as a result, NATO air defenses would be disorganized. Pact air forces might simply press on without attempting to destroy NATO air defenses.

Assuming a no-notice war, most combat missions would be preplanned counter-air missions and airstrikes against known airfields, army bases, and NATO ground positions. Prepositioned stocks of U.S. Army equipment in Germany and the Netherlands would be particularly vulnerable, allowing the pact to knock out entire divisions without fighting them.

The Warsaw Pact plan makes clear two things. First, in a surprise attack, the most important forces are the ground forces. The quicker they can advance, the sooner they can overrun NATO—and that includes airbases and naval facilities. The faster they can force West Germany to surrender, the sooner the rest of NATO runs out of reasons to continue fighting—and the specter of all-out nuclear war recedes.

Second, NATO would have lost the war. NATO’s assumption that the war would gradually escalate to nuclear weapons would have been fatal against an adversary that planned to use them on Day One. The use of nukes in Western Europe would have devolved the decision to employ them away from NATO as a collective body to heads of the United States, France, and the UK. All three would be forced to use battlefield nukes to save their troops—and risk escalation that would devastate their homelands—or walk away from the rest of NATO.