Since 2001, U.S. Special Operation Forces Have Doubled In Size 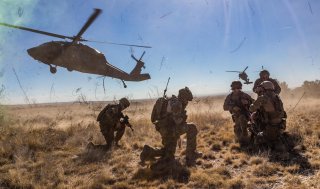 Here's What to Remember: Every U.S. military branch has its own elite special operations unit.

Raiders trainees undergo a three-stage screening, followed by a nine-month training program in skills ranging from demolitions, diving, foreign languages, close-quarters combat, and wilderness survival. Raiders have been involved in actions ranging from brutal urban warfare against ISIS in Mosul, Iraq and Marawi in the Philippines, to counter-terror actions in Mali.

But of those that pass the initial screening, only one out of three make it through the initial physical conditioning unit, the third week of which is known as ‘Hell Week,” in which trainees perform 20 hours of intense physical activity per day.

The basic SEAL unit is a sixteen-man SEAL platoon, which sub-divide into two squads. The Navy has roughly 3,000 Navy SEALS in eight SEAL teams, each consisting of six platoons and three eight-person special task support units.

To map out just where hostiles are in the first place, AFSOCOM has a fleet of small U-28, C-145, and C-146 surveillance planes stuffed to the gills with hi-tech sensors used in low-profile spy flights across Africa and Southwest Asia alongside MQ-9 Reaper drone squadrons.

Most STSs are grouped under the 24th Special Operations Wing, including the 24th STS, a Tier 1 unit that habitually embeds personnel with Delta Force and DEVGRU.

But as special forces undertake a large share of military efforts in Afghanistan, Iraq, Libya, Mali and Syria, they are subject to being word down with near-continuous combat deployments abroad

These scandals are leading to calls within the community to acknowledge the problem and reestablish standards and norms of conduct.

Special Operations forces may thus develop new tactics on how their unique capabilities could counter Russia’s own unconventional warfare tactics in Eastern Europe, or be employed to surveil and raid militarized islets in the Pacific Ocean.