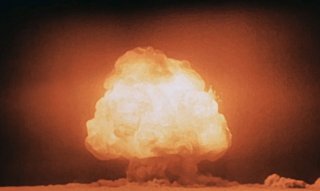 A U.S. nuclear bomb exploded off the South Carolina coast after U.S. military leaders refused an order by Pres. Barack Obama to destroy Charleston in a false-flag operation to create chaos in the United States, an apparently Russian-backed “newspaper” claimed on Oct. 12, 2013.

According to the article, military intelligence known as the GRU notified Russian president Vladimir Putin and the Russian general staff that a U.S. B-61-11 nuclear bomb exploded 620 miles off the coast of Charleston on Oct. 8, 2013, causing a magnitude-4.5 earthquake that Russian intelligence was able to measure through seismic detectors.

“Adm. Giardina and Gen. Carey were the first to note Obama’s transferring of nuclear weapons to Charleston outside of the normal chain of command, GRU experts say in this report, Generals Gurganus and Sturdevant were tasked with leading U.S. Marine troops from Camp Lejeune in North Carolina to begin the implementation of martial law after this false-flag attack had taken place,” the European Union Times claimed, obviously without evidence.

As the saying goes, war is politics by other means, and South Carolina was strongly opposed to the Obama administration’s policies. But the president of the United States resorting to nukes to stop the Tea Party? Crazy as that sounds, Snopes.com had to post a denial.

What is interesting about the story is that it seeks a patina of credibility by linking to real events. Four U.S. commanders were indeed fired in October 2013, but not for mutiny. Giardana and Carey were senior commanders of U.S. nuclear forces that failed recent inspections of missile launch crew readiness, as well as alleged lapses in personal behavior.

Gurganus and Sturdevant were forced to retire because of a Taliban attack against a poorly defended airbase in Afghanistan that killed two Marines and destroyed six Harrier jets.

Also interesting about this story is its source. The European Union Times, which describes itself as an “international newspaper” that is “produced by a dedicated staff from the European Union and by contributors from all around the world,” apparently has a surprising knack for obtaining secret Russian military intelligence reports.

Another story alleged that the Russian government might issue a travel advisory to its citizens, warning them to avoid the United States because they might get shot by out-of-control American police.