In 2015, France "Sunk" An Aircraft Carrier (And China Paid Attention) 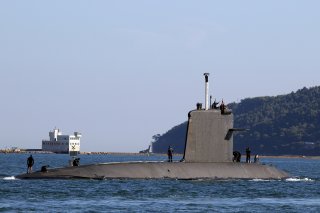 Here's What You Need To Remember: The revelation that a U.S. Navy aircraft carrier group could be so vulnerable to a nuclear submarine did not make the mainstream media, and no mention was made by the many attentive defense analysts on this site, so it seems. However, the Chinese defense media does not miss much.

Lyle J. Goldstein is Associate Professor in the China Maritime Studies Institute (CMSI) at the U.S. Naval War College in Newport, RI.  The opinions expressed in this analysis are his own and do not represent the official assessments of the U.S. Navy or any other agency of the U.S. Government. This article first appeared in December 2015.