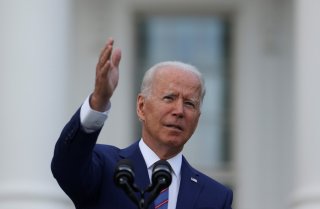 Here's What You Need to Remember: Biden hasn’t signaled whether he would forgive student loan debt by executive action, though he did instruct Cardona to draft a report that outlines the president’s legal authority to cancel up to $50,000 in student debt per borrower.

The Education Department has already canceled roughly $3 billion in student loan debt since the beginning of 2021, upholding part of President Joe Biden’s campaign pledge to lessen the student loan burden on Americans.

But that massive step only represents 0.1 percent of the $1.7 trillion of student loan debt outstanding and could just be the start of a string of student loan forgiveness measures during Biden’s time in the White House.

Eligible borrowers will receive 100 percent loan discharges, according to the department.

The forgiveness measure was made possible due to a provision in the law that enables federal student loan borrowers to request that their debt be nixed if their schools engaged in any illegal behaviors.

The relief comes after two other forgiveness programs were approved by the Biden administration, including one from March that canceled $1.3 billion in loans for more than 41,000 borrowers with total and permanent disability.

“Borrowers with total and permanent disabilities should focus on their well-being, not put their health on the line to submit earnings information during the COVID-19 emergency,” Cardona said in a statement when the initiative was announced. “Waiving these requirements will ensure no borrower who is totally and permanently disabled risks having to repay their loans simply because they could not submit paperwork.”

Biden ignited his student loan cancelation rollout shortly after taking office when he cut 72,000 loans that reached up to $1 billion, bringing the amount of student loans forgiven to $2.8 billion overall.

But far-Left Democrats don’t think that’s enough, as lawmakers from both congressional chambers have pressured the president to unilaterally forgive $50,000 per federal student loan borrower.

“With the flick of a pen, President Biden could get it done and I promise that I’ll keep pushing the Biden administration to do it,” Senate Majority Leader Chuck Schumer (D-NY) said at a virtual panel last month.

Biden, however, hasn’t signaled whether he would forgive student loan debt by executive action, though he did instruct Cardona to draft a report that outlines the president’s legal authority to cancel up to $50,000 in student debt per borrower.