3 Nuclear Deterrence, Missile Defense Initiatives the Next Administration Should Continue 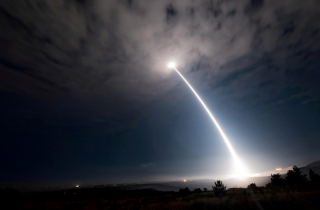 In a revived era of great power competition, the United States must face revisionist powers and rogue regimes with advancing nuclear forces and a greater willingness to use them than we have experienced in the past.

It’s incumbent upon the next administration to protect American citizens and interests from these rising threats.

Under the Trump administration, U.S. nuclear and missile defense capabilities have progressed, improving our deterrence and defense against the increasingly sophisticated threats posed by adversaries.

Three initiatives pursued by the Trump administration that the next administration should continue are nuclear force modernization, arms control negotiations with Russia and China, and advanced homeland missile defense.

First, the next administration should continue modernizing U.S. nuclear forces. The nuclear warheads and delivery systems that we have now have been around since the 1970s and are long overdue for replacement.

For example, the intercontinental-range ballistic missiles deployed throughout the United States entered service in 1970 with only a 10-year intended lifetime. Now, they will remain in service through 2030. That’s fully half a century longer than they were meant to last.

The Obama administration initiated the effort to recapitalize the United States’ aging nuclear delivery systems, warheads, and infrastructure, and the Trump administration in turn made significant progress in advancing those projects.

It’s imperative to replace old systems before they introduce reliability issues and simply age out. Doing so requires requesting the funding necessary to complete nuclear modernization programs in a timely manner.

Second, the next administration should continue pursuing an improved arms control agreement with Russia and China.

New START, the current agreement between the United States and Russia, is seriously flawed. Of particular significance, New START does not constrain Russia’s growing stockpile of tactical nuclear weapons. Russia could dangerously deploy these weapons on the battlefield as part of its strategy to escalate conflict with a limited nuclear strike to force the United States to back down.

To address that concern, the Trump administration has pursued a deal with Russia to temporarily extend New START in exchange for a freeze on all nuclear warheads, including these tactical weapons. Despite having initially agreed, the Russians have since soured on that compromise.

While it may be tempting for the next administration to simply agree to extend New START for another five years, it must continue pushing for a better deal.

Third, the next administration should continue work on the Next-Generation Interceptor to ensure protection of the homeland from missiles fired by malign actors such as North Korea.

The United States currently deploys 44 ground-based interceptors to defend the homeland from missile attack. But having been around since 2004, those interceptors will eventually lose their efficacy in dealing with North Korea’s increasingly sophisticated weapons program.

Continued support for the Next-Generation Interceptor by the next administration will be crucial to ensuring the United States is protected by a missile defense technology built in the era of 5G and the iPhone 12, instead of with technology from the era of the iPod and flip phone.

National defense should not be a partisan issue. To continue down the path of advancing deterrence and defense against aggressive adversaries, the next administration must continue efforts to modernize the nuclear triad, pursue a comprehensive arms control agreement, and upgrade the nation’s homeland defense system.

This article was written by Patty-Jane Geller and Noah Levin and first appeared in the Daily Signal.