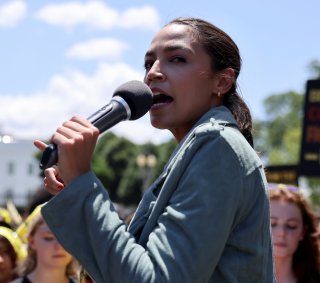 Here's What You Need to Remember: Demands like those of Rep. Ocasio-Cortez and her colleagues to expand the spending policies included in the legislation will only increase the challenges faced by Speaker Pelosi and Leader Schumer to shrink that package to meet the political realities of their narrow majorities.

Rep. Alexandria Ocasio-Cortez (D-NY) recently announced she and other liberal House lawmakers are urging Congressional leadership to “includ[e] unemployment insurance (UI) reforms in the Build Back Better Act.” That’s shorthand for Democrats’ floundering $3.5 trillion spending plan that to date has not included unemployment benefit expansions among its gargantuan spending provisions. So what’s behind AOC’s 11th hour push to include even more benefit expansions in this legislation, even as Democratic leaders are under tremendous pressure to shrink its price tag?

The specific policies promoted by AOC and her colleagues are familiar fodder from the political left that has long wanted to force states to increase their unemployment benefits: “Congress should set a floor for UI duration that states must follow, broadly include part-time workers, ban exclusions based on past wages, and require alternative base periods.” Translation: The federal government should mandate that states expand the duration of, eligibility for, and amount of state UI benefits paid to laid-off workers, even those who earned as little as $1,500 prior to being laid off and are now seeking only part-time work.

If that sounds familiar, those proposed permanent policies resemble in many ways the temporary pandemic benefit expansions Democrats allowed to expire on Labor Day, when the benefits of a record 7.5 million recipients in mostly blue states abruptly ended. So perhaps this push is simply political salve for those who just lost benefits, in the form of a promise of renewed future benefit expansions.

Whatever its intent, the timing of AOC’s letter couldn’t be worse from a standpoint of following regular order in Congress. AOC and her colleagues wrote House Speaker Nancy Pelosi (D-CA) and Senate Majority Leader Chuck Schumer (D-NY) on September 16. That’s the day after the House Ways and Means Committee — which has jurisdiction over the nation’s UI system as well as all of the tax hikes and much of the new spending in the mammoth $3.5 trillion legislation — completed its formal action on that legislation. If these Members really wanted to shape the contours of such legislation in the light of day, and in the chamber in which they serve, the right time to do it was while the committee was acting — not after.

But that timing suggests AOC and her colleagues don’t care much about the normal deliberative process in the House and its key committees. That is ironic considering she made waves after arriving in Congress by vying for a seat on the powerful Ways and Means Committee. She didn’t succeed, and Rep. Tom Suozzi (D-NY) was instead added to the committee to replace former Rep. Joe Crowley (D-NY), whom AOC defeated in a 2018 primary. AOC subsequently supported a primary challenger against current committee Chairman Richard Neal (D-MA). Neal won his primary, but AOC’s efforts certainly didn’t endear her with the chairman.

Those dynamics suggest the primary target of AOC’s letter may instead be Senate Majority Leader Schumer, whose colleague Senate Finance Committee Chairman Ron Wyden (D-OR) has long been a supporter of similar UI reforms. Sure enough, Wyden and several colleagues just introduced the Unemployment Insurance Improvement Act, which includes precisely the reforms AOC is pushing and which the senators have said they “intend to include . . . in the Build Back Better package.”

That effort is more than an inside-Congress exercise. Dozens of special interest groups are currently scrambling to get their favored policies included in the mammoth — and obviously still under development — spending bill. Judy Conti of the liberal National Employment Law Project described the UI reform effort aptly: “We’re still trying to claw our way into this deal. . . . It’s kind of a feeding frenzy right now.” Her advocacy group is the only one listed as supporting Wyden’s legislation in his marketing materials.

That “feeding frenzy” will continue at least as long as the ultimate size of the massive spending package remains unclear. Meanwhile, demands like those of Rep. Ocasio-Cortez and her colleagues to expand the spending policies included in the legislation will only increase the challenges faced by Speaker Pelosi and Leader Schumer to shrink that package to meet the political realities of their narrow majorities.

As we will see tomorrow, these policies would also force red and blue states alike to increase benefits and taxes to satisfy this new Washington mandate. And the required benefit expansions and tax hikes would affect key states of Arizona and West Virginia, represented by key senators Kyrsten Sinema (D-AZ) and Joe Manchin (D-WV). They will certainly hear from their governors and employers about those added burdens if this misguided policy gains traction.