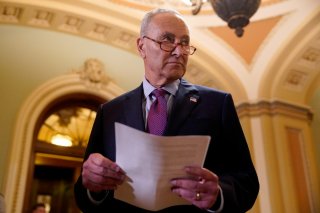 This week, Senate Democrats announced an agreement among themselves on a budget plan to raise spending by another $3.5 trillion in the coming years. This spending will be in addition to the trillion-dollar bipartisan infrastructure package also under development. While many details of this latest spending spree remain vague, Americans can be sure one thing: Its actual cost will be far greater than its already astonishing $3.5 trillion sticker price.

Consider this passage from a Washington Post article describing some of the new spending Democrats intend that nonetheless could be left out of the $3.5 trillion plan:

The plan is also likely to shorten the duration of Biden’s proposed social spending programs relative to the initial White House plan. The president’s jobs package, for instance, called for extending a more robust Child Tax Credit through 2025; congressional Democrats’ package could do so for fewer years, said the people familiar with the matter, though the duration has not yet been determined.

The “more robust Child Tax Credit” refers to newly expanded federal payments to most American parents, which were increased in March in another trillion-dollar law to as much as $3,600 per child per year. Starting this week, those payments will reach tens of millions of households in monthly installments. And for the first time since this program began in the 1990s, those amounts are payable even to parents who are “unwilling to work,” as Rep. Alexandria Ocasio-Cortez (D-NY) famously put it in 2019. That will revive welfare checks for millions of nonworking households, effectively overturning successful pro-work welfare reforms.

But under current law that “more robust” policy is in place only for this year. That means if it is not extended in future legislation, maximum payments will return to their former level of $2,000 per child next year. Those payments would once again vary based on work (non-workers wouldn’t get checks), earnings (low-income parents who earn more would get bigger payments), and taxes (only parents who earn enough to owe federal income taxes would get the full amount). And after 2025, the $2,000 payment will drop to the $1,000 level that preceded the 2017 Trump tax reform law.

Yet despite vows by the Biden administration and congressional supporters to permanently extend this year’s “more robust” policy, the latest $3.5 trillion spending plan assumes nothing of the sort. As the Washington Post notes, the plan may not even assume the four-year extension called for in President Biden’s own American Family Plan. Instead, it could budget for “fewer years” of expanded checks as a way of restraining the plan’s already massive $3.5 trillion sticker price. For example, if the plan assumes just a two-year extension of current law at a cost of about $100 billion per year, that would omit about $200 billion from the cost of Biden’s own four-year plan.

But that is just the start. The reason President Biden’s plan budgeted for only a four-year extension — instead of the permanent extension he and other supporters really want — is costs rise rapidly after that. Added costs roughly double after 2025, when maximum payments would otherwise drop from $2,000 to $1,000 per child. In essence, Biden counted on the temporary expansion in the Trump tax reform law to minimize the cost of his more expensive policy for as long as he could. And then — like the latest Senate spending plan — he assumed someone else will figure out how to pay for future extensions.

As the temporary expansion of the Child Tax Credit included in the 2017 Trump tax reform law suggests, Republicans are not immune to such budgetary game-playing. But Democrats’ latest spending plan appears to take this Washington subterfuge to a whole new level. In the end, it is hard to know which is more astounding — the $3.5 trillion in higher spending its supporters admit, or the likely trillions more they don’t.