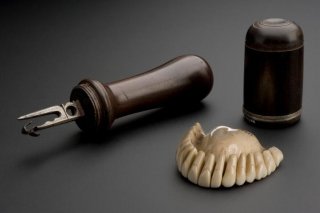 In 1624, a physician called Jean-Baptiste van Helmont told a strange story in his book of “magnetic cures” about a man from Brussels who had lost his nose. Having had his nose cut off “in combat”, the man went to a famous Italian surgeon, Gaspare Tagliacozzi, who promised to make him a new one “resembling nature’s pattern”. The problem was that Tagliacozzi wanted to use some of the man’s own skin to recreate the nose. Not keen on this idea, the noseless man decided to buy his way to a new face. He hired a local porter to donate some of his skin and had the surgeon fashion a new nose out of this foreign tissue.

All seemed well, recounted Van Helmont, until just over a year later, the man found that his new nose suddenly grew “frigid and cadaverous”. Over the next few days, it began to putrefy on his face, and within a week it had dropped off entirely.

Investigating the cause of the sudden misfortune, the man’s friends found out that the porter who supplied the flesh had died at just the same time that the nose first turned cold. Though Van Helmont admitted that the story seemed fantastical, he insisted that there were men “of good repute, that were eyewitnesses of these occurrences”. This, he insisted, was not superstition, but evidence of a powerful “affinity” between the borrowed tissue and its original owner.

When I read Helmont’s extraordinary story, almost four centuries later, it led me down a rabbit hole of 17th-century medical and philosophical writings, and eventually to writing a book on early modern surgery and embodiment. In the process, it emerged that the phenomenon Van Helmont described was based on philosophical and scientific speculation about the existence of a “sympathetic” connection between disembodied flesh and its original owner. This in turn reflected deep-seated belief in the importance of one’s body to identity, which led to anxious debates about the resurrection of the body after death.

I also found that though the concerns of Renaissance patients and physicians about “borrowed flesh” might seem outlandish and out of date, they are surprisingly relevant to the modern surgical landscape. Both commonplace cosmetic surgeries and more radical procedures, such as hand and face transplants, centre on the belief that how we look is a central part of our identity, at the same time that they offer us the chance to be our “real” selves by changing our appearance.

Like the early rhinoplasty described by Helmont, most elective cosmetic surgery is still undertaken for aesthetic reasons. The popularity of these “plastic” surgeries has remained steady for several years; 2019 saw 28,000 aesthetic surgeries performed in the UK, of which nearly 3,000 were rhinoplasties (nose jobs).

At the experimental edges of surgical endeavour, however, ever more ambitious attempts are being made to restore and transform patients with facial differences. In 2020, for instance, New Yorker Joe DiMeo became the recipient of the world’s first double hand and face transplant. DiMeo had suffered 80% burns in a car accident, and his reconstructive surgery was hailed as a medical breakthrough.

Though often life saving, these radical surgeries can raise issues of identity not dissimilar to those of the Renaissance nose job. The recipient of the world’s first hand transplant, an Australian named Clint Hallam, neglected the physical therapy and close medical supervision his doctors advised, on the grounds that he didn’t identify with his new hand. He then stopped taking his immunosuppressant drugs in order to force surgeons to remove the limb. “As it began to be rejected,” explained Hallam, “I realised that it wasn’t my hand after all.”

In the Renaissance, complete limb and face replacements like those performed on DiMeo or Hallam belonged in the realm of fantasy. Nonetheless, this period too had its surgical pioneers, and Tagliacozzi’s famous nose reconstruction was at the cutting edge of medical science. The operation was first described by Tagliacozzi in 1596; he had probably learned it from an Italian family called the Brancas.

In painstaking detail, Tagliacozzi outlined how a portion of the skin of the patient’s arm first had to be lifted with forceps and cut on two sides, before lint was placed underneath to prevent the skin reuniting with the flesh. When the swelling from this wound had died down, the surgeon was to cut the third edge of the skin flap, fold it back and bandage it, keeping the skin attached to the arm to maintain its blood supply.

After two weeks or so, the surgeon could consider suturing the flap – still attached at one end to the arm – to the mutilated nose, binding the area with specially made bandages. For the first week, it was essential that the patient avoided any movement, even talking, if the skin was to have a chance of adhering. Three weeks later, one might fully detach the skin from the arm and continue shaping the nose. But it would be a further six to nine weeks before the nose could be finished, complete with nostrils.

In an era before antibiotics or anaesthesia, the operation was dangerous and painful. Indeed, it’s unclear if anyone other than Tagliacozzi ever attempted this procedure. Nonetheless, it captured the public imagination, partly because it was so timely.

The 16th and 17th centuries saw an unprecedented need for facial surgery, driven by decades of war and rampant infectious disease. Syphilis, or the “French pox”, as it was known, was both the most commonplace and the most shameful way to lose your nose, as serious infections caused the nasal cartilage to disintegrate. Typically, men picked up the venereal disease in brothels and took it home to their wives, and children might inherit it from their parents.

There was also a social toll from syphilis, with vicious judgements passed on those with visible symptoms. In 1704, for example, the diarist Sarah Cowper was told by her friend about a mutual acquaintance whose husband had given her the pox. Hearing that the afflicted woman was “airy, brisk, and a great Dancer”, Cowper retorted that “by no means shou’d any Woman dance without a nose, tho’ never so innocently lost”.

For many years, people had attempted to hide their shame with false noses, often made of silver and enamelled to look like real flesh. But Tagliacozzi’s operation offered the chance of a real nose. No records exist to indicate how many nose operations Tagliacozzi performed, perhaps because he died aged 49 just two years after publishing his famous work on the topic. Nonetheless, he claimed to be able to make noses “so perfect” that some patients found them “better than the original ones which they had received from nature”.

Of course, this wasn’t easy to achieve. Even in modern hand transplants, the new limb is never a perfect match for the recipient body. The skin will differ in colour or texture, and the point of attachment is clearly visible. In the case of the 17th-century nose job, Tagliacozzi admitted that by using skin from another part of the body, the grafted nose would differ in colour and texture from the recipient’s facial skin, and might grow hair “so luxuriant that it must be shaved”.

These differences led to allegations such as the one made by Van Helmont that, contrary to Tagliacozzi’s original instructions, rich patients were buying flesh from other people to make their new noses. Though there was no evidence for this, it was soon treated as fact, both by other physicians such as Van Helmont and by contemporary satirists. The English poet Hester Pulter wrote a jesting poem to her fellow royalist Sir William Davenant, offering to donate a piece of her leg to repair his missing nose, while the satirist Samuel Butler claimed that:

… learned Talicotius from
The brawny part of Porter’s bum
Cut supplemental noses, which
Lasted as long as parent breech:
But when the date of nock was out,
Off drop’d the sympathetic snout.

In part, this idea of exchanging flesh between one person and another was fuelled by real scientific experiments. At the Royal Society, a coalition of scientists and physicians, men such as Robert Boyle were trialling blood transfusions and skin grafts between animals. They hoped to discover whether qualities such as aggressiveness or friendliness were innate in the blood of the animals they experimented on, though they were hindered by the tendency of their test subjects to run away at the earliest opportunity. In France, meanwhile, there was a bold but ill-fated attempt to transfuse the blood of a calf into a madman. The theory was that the meek nature of the calf would be transferred in its blood, and allay the madness, but instead the man died, and the Parisian medical authorities banned any more human infusions.

Rumours about “borrowed” noses also reflected growing public unease about the potential for cosmetics, prostheses and clothing to deceive onlookers. In the image-obsessed 1600s, fashion-conscious consumers could benefit from padding to fatten the cheeks and hips, corsets to whittle the waist, lead washes to whiten the complexion, rouge to redden the cheeks, and drops to brighten the eyes. More serious customers could even pay to have new teeth inserted, sometimes drawn from the mouths of corpses or servants. The diarist Samuel Pepys made it clear that he considered this to be deceitful: