5 Artillery Pieces that Blow Away the Competition 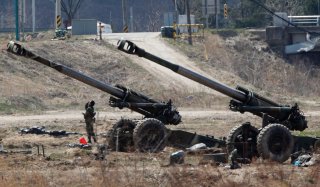 Here's What You Need to Remember: The best cannon is the one that isn't pointed at you.

Editor’s Note: Please see previous works on historical weapons and battles, including 5 Tanks That Changed History, Top Five Naval Battles of All Time, The Five Deadliest Weapons of World War I, The Five Greatest Military Strategists of All Time, and Top 5 Battleships of All Time.

“Ultima ratio regum”—"the last argument of kings,"—was the inscription that Louis XIV engraved on his cannon. And throughout history, it is the mouths of the big guns that have settled many a dispute between states.

Which cannons are best? The short answer is that the best cannon is the one that isn't pointed at you. But here are five that have had more profound influence than others:

It was primitive and looked like a giant chess rook. Yet the Great Turkish Bombard changed history.

Proud Constantinople's walls had kept invaders at bay for centuries. For attackers armed with swords and arrows, storming the Byzantine capital's high, thin walls was nearly impossible. Though the Byzantine Empire was only a shadow of its former glory, there was no reason to expect defeat when the Ottoman Turks surrounded the city for yet another siege in 1453.

But this time, the Ottomans had a secret weapon: a newfangled cannon brought to them by a Hungarian Christian named Orman. Orman had first offered his cannon to the Byzantines, who refused to meet his price. How penny-wise and pound-foolish that decision was became evident when Orman's cannon started knocking down Constantinople's walls.

The fall of Constantinople led to the rise of the Ottomans, which changed the history of the Mediterranean, Europe and the world.

A cannon made out of leather? It sounds like “the last argument of clowns.” But Sweden's seventeenth-century king Gustavus Adolphus—back in the days when Sweden was better known for its armies than its bikini team—changed warfare with them.

His leather cannon consisted of a copper tube clad in leather. This made it light enough to be hauled by two men at a time when cannons were so heavy that they were practically immobile on the battlefield. Though the leather cannon ultimately fizzled, it pioneered the concept of artillery mobile enough to be deployed tactically.

Cross a field artillery piece with a machine gun, and that is the how the legendary French 75-millimeter cannon must have appeared to its enemies. Developed in 1897, the French 75 was unprecedented: a light artillery piece that could pump out fifteen rounds a minute.

It wasn't just rate of fire that distinguished the French 75. Until that time, the recoil of firing knocked the cannon out of position, forcing the gunners to manhandle the piece back into position, and rendering accurate direct fire impossible. But the French 75 had a revolutionary hydro-pneumatic mechanism that absorbed recoil and allowed the gun to remain in position.

Unfortunately, the French 75 had a glaring weakness that quickly became apparent in the opening days of World War I. It was a direct-fire weapon, which meant its shells couldn't be lobbed into trenches like a howitzer's.

If ever there was an artillery piece that dominated the battlefield, it was the German 88. Originally designed as an anti-aircraft gun, until German soldiers—whose early anti-tank guns were ineffective against Allied heavy tanks—discovered that the 88 was a superb tank-killer.

The 88 established a fearsome reputation in North Africa, Russia and Western Europe. It instilled fear in the hearts of Allied tank crews, who desperately tried to protect their vehicles with sandbags and other impromptu armor.

Though the 88 became a byword for the prowess of German weapons, there was nothing magical about it. Because it was an anti-aircraft gun intended to shoot at fast, high-flying objects, it was built to have a high muzzle velocity, a stable firing platform, and superb German optics. The British had the 3.7-inch anti-aircraft gun, which could have been pressed into service as an effective anti-tank weapon—except that gentlemen don't use anti-aircraft guns to shoot at tanks.

The G-5 can shoot extended-range projectiles almost thirty miles. The G-6 is mounted on a wheeled, rather than a tracked chassis. Besides South Africa, the G-5 was also used by Saddam Hussein's army against Iran.