The 5 Deadliest Aircraft Carrier Aircraft of All Time 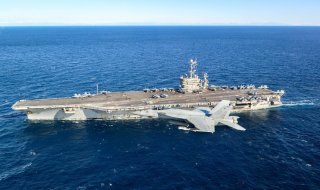 Here's What You Need To Remember: McDonnell Douglas manufactured AV-8 Harriers also performed well in combat over Afghanistan and Iraq and remains in service with the U.S. Marines and the navies of Spain and Italy.

Designing an airplane that can fly at high speeds lugging heavy weapons loads, and yet still take off and land on a short flight deck a few hundred meters long has always posed a formidable engineering challenge. Sea-based fighters typically feature folding wings for easier stowage, ruggedized landing gear, and arrester equipment, and greater robustness to endure the wear and tear from sea-based operations. These all literally weigh against the exquisite engineering exhibited by land-based fighters.

Sébastien Roblin holds a master’s degree in conflict resolution from Georgetown University and served as a university instructor for the Peace Corps in China. He has also worked in education, editing, and refugee resettlement in France and the United States. He currently writes on security and military history for War Is Boring. This article first appeared earlier and is being reposted due to reader interest.