5 Firefight Films to Watch Before You Die 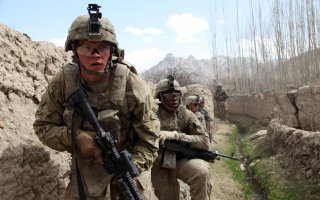 Here's What You Need to Know: These chaotic engagements show that the direction and command of calm, competent leaders are crucial to survival.

When warring factions meet in combat, it’s terrifying. And when the two sides are far from evenly matched, it’s worse. But safely distanced from the battlefield and buffered by the passage of time, those David and Goliath battles can make wonderful movies.

Consider the battle of the Alamo (Feb 23–Mar 6, 1836). That one didn’t end so well for the Texicans making a stand at the mission. But that slaughter has been replayed on the silver screen more than once, the latest in 2004.

But history is also replete with examples of when the few survived the onslaught of the many. Despite different eras, adversaries, weapons, and technology, there are reasons why smaller forces sometimes beat the many —as illuminated in the following five films about firefights where everybody should have died, but didn’t. See if you can figure out why some survive.

#5. Zulu (1964). On January 22–23, 1879, 3,000 Zulu warriors attacked a British force of 150 occupying Rorke’s Drift, a small station at a river crossing in the Natal Province, South Africa. Luckily, they had the river at their back, Enfield rifles, and a pair of unflappable lieutenants in charge. In the end, the Zulus withdrew. The British lost only 17 in their complement. Eleven Victoria Crosses (the British equivalent of the Medal of Honor) were bestowed to the defenders of Rorke's Drift, seven from one regiment (the most ever received for a single action by one regiment). The film version is incredibly impressive, ranked in the top 100 British films of all time.

#4. Siege of Jadotville (2016). From September 13–17, 1961, 155 Irish soldiers (part of a UN peacekeeping force) were assaulted by 4,000 Katangese troops at the town of Jadotville in the Congo. The resilient Irish commander, Commandant Pat Quinlan, coolly directed an effective perimeter defense, effectively using the detachment’s 60 mm mortars and Vickers machine guns, to turn back waves of massed assaults. The attackers were seriously beaten down, but Quinlan’s men ran short of ammunition and supplies. They radioed their plight to headquarters: “We will hold out until our last bullet is spent. Could do with some whiskey.” After a cease-fire, Quinlan agreed to surrender. His command suffered only five wounded. The battle was little noted at the time, but the film has done much to remind of Quinlan’s leadership and the professionalism and heroism of his men.

#3. Danger Close (2017). Warriors don’t always get time to psyche up for battle. Sometimes, it arrives unexpectedly, a “meeting engagement” where opposing forces bump into each other on the battlefield. On August 18, 1966, an Australian infantry company of 108 men, were attacked by North Vietnamese Army units and Viet Cong irregulars (estimated total force between 700–2,500) at a rubber plantation near Long Tân, in Phước Tuy Province, South Vietnam. At first reports, headquarters feared that parts of the Australian task force had been overwhelmed and annihilated. Air support and artillery helped hold off the enemy assaults, as the company commander Major Harry Smith directed the consolidation and defense of his forces. A relief column of armored personnel carriers, equipped with heavy machine guns arrived in time to drive off the enemy attack before the Smith’s men were overrun. The estimate of Australian losses was 30–47, many of them from the artillery support that had to be brought in “danger close” (within 50 meters) of the defenders’ position to stop the human waves trying to sweep over the Aussies. The film accurately retells the most well-known Australian battle in the Vietnam War, often heralded as an example of Australian military grit on par with battles like Gallipoli (1916) and Kakoda (1942).

#2. We Were Soldiers (2002). Here is another nasty meeting engagement in Vietnam—the first major battle between American and North Vietnamese regular army units, and the first test of U.S. helicopter-borne assault operations. On Nov. 14-16, 1965, an American battalion commanded by Lt. Col. Hal Moore was inserted at Landing Zone X-Ray, which turned out to be right on top of an entire enemy division. With artillery and air support, the battalion held off a force more than three times its size, losing 30 men. The film is extraordinarily accurate in its depiction of the battle.

#1. Outpost (2020). On October 3, 2009, at the Battle of Kamdesh in Afghanistan, an outpost held by a small contingent of American and Afghan forces was surrounded by an estimated 350 Taliban. The enemy was able to breach the perimeter of the outpost. Before the U.S. forces could be relieved, eight Americans died. Individual acts of bravery and leadership, as well as air support, prevented the U.S. contingent from being completely annihilated.

Would I recommend watching these movies back to back? Yes, not just for the rush, but to pick out the common factors from these relatively faithful recreations of real-life battles. One constant is leadership. In chaotic engagements, the direction and command of calm, competent leaders are crucial to survival. If leaders drop the ball, that’s when things get really dicey.

Of course, firepower counts, too. In all these situations, soldiers survived to fight another day because their leaders were able to offset the enemy’s numeric advantage by directing weapon’s fire at the decisive point to prevent the enemy from massing and overwhelming the defenders.

Finally, terrain matters. In most of these cases, the outmanned chose respectable ground to defend—and that helped. The exception on this list was the Combat Outpost (COP) at Kamdesh. The COP was a terrible place to defend, Surrounded by higher ground on every side, it was a terrible place to defend. The surviving Americans were truly lucky (another albeit wildcard factor in war) to get out alive.