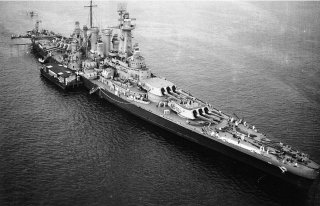 Here’s What You Need to Remember:​ The following evening, the Japanese tried again. The Americans, virtually tapped out after months of grueling combat, went to their aces in the hole; USS Washington and USS South Dakota, a pair of fast battleships normally tasked with escorting carriers.  Four destroyers screened the two battleships.  The IJN force included the battleship Kirishima (sister of Hiei, and survivor of the first battle), four cruisers, and nine destroyers.

The age of the steel line-of-battleship really began in the 1880s, with the construction of a series of warships that could carry and independently aim heavy guns external to the hull.  In 1905, HMS Dreadnought brought together an array of innovations in shipbuilding, propulsion, and gunnery to create a new kind of warship, one that could dominate all existing battleships.

Although eventually supplanted by the submarine and the aircraft carrier, the battleship took pride of place in the navies of the first half of the twentieth century. The mythology of the battleship age often understates how active many of the ships were; both World War I and World War II saw numerous battleship engagements. These are the five most important battles of the dreadnought age.

(Recommended: Could Trump Bring Back the Battleship?)

The two sides fought for most of an afternoon.  The Germans has sixteen dreadnought battleships, six pre-dreadnoughts, and five battlecruisers.  Against this, the British fielded twenty-eight dreadnoughts and nine battlecruisers. Jellicoe managed to trap the Germans on the wrong side of the Grand Fleet, but in a confused night action, most of the German ships passed through the British line, and to safety.

The surrender of France in 1940 left the disposition of the French Navy in question. Many of the heavy ships, mostly located in French colonies, could aid either Axis or British forces.  In early July 1940, Winston Churchill decided to take a risk-averse approach.  The Royal Navy would force a French decision, with the result of either seizing or destroying the French navy.

(Recommended: 5 Most Powerful Battleships Ever)

The British dispatched Force H from Gibraltar, consisting of HMS Hood, HMS Valiant, HMS Resolution, the aircraft carrier HMS Ark Royal, and a flotilla of supporting ships to either intimidate or destroy the French.  Royal Navy representatives submitted an ultimatum to their French counterparts, demanding that the ships either join the British, sail to America and disarm, or scuttle themselves. What precisely happened in the communications between Force H and the French commander remains in dispute.  What we do know is that the British battleships opened fire, with devastating results. Bretagne’s magazine exploded, killing over a thousand French sailors.  Provence and Dunkerque both took hits and promptly beached themselves.  Strasbourg made a daring dash for the exit, then outran Hood to escape the British task force.

Although the Italians failed to score a victory in the battle, they did demonstrate that the Royal Navy could not operate in the central Mediterranean without heavy escort.  The addition of two new, modern fast battleships in the next months would give the Italians a major advantage, which the airstrike on Taranto would ameliorate only for a time. The Allies could not claim naval supremacy in the ‘Med’ until 1943 when the Italian fleet surrendered under the guns of Malta.

Appreciating the threat that long-range fire posed to the thin deck armor of Hood, Vice Admiral Lancelot Holland sought to close the range as quickly as possible.  Unfortunately, Bismarck’s fifth salvo caught Hood amidships, resulting in a huge explosion.  Analysts debate to this day what precisely happened aboard Hood, but the blast took her to the bottom so quickly that only three crewmembers (from a crew of 1419) escaped.

In late 1942, Americans owned the day over the Solomon Islands, largely by virtue of their control of Henderson Airfield.  The Japanese, on the other hand, owned the night.  The Imperial Japanese Navy (IJN) used its advantages at night to run supplies and reinforcements to Japanese troops on Guadalcanal and to bombard American positions.