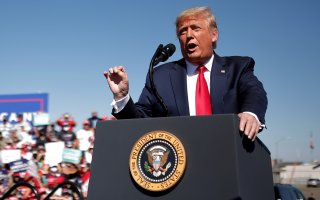 The storyline of the presidential campaign seems to be solidifying, as polls show Joe Biden maintaining a sizable lead over President Donald J. Trump.

But the lead may not be insurmountable, and the election is not over.

The history of polling in modern elections suggests that the endgame could yet be altered by a number of disruptive scenarios.

None of the following narrative-altering scenarios can be considered a certainty. But only one is rather far-fetched. All are informed by the content of my latest book, “Lost in a Gallup: Polling Failure in U.S. Presidential Elections.”

Here are descriptions of five prospective scenarios, in order of possibility. In a bow to even-handedness, a reality check is appended to each of them.

Jarring, out-of-the-blue developments have happened often enough in presidential election campaigns as to be almost expected. Remember James Comey’s announcement 11 days before the 2016 election that the FBI had reopened its investigation into Hillary Clinton’s emails? It may have shifted enough votes in battleground states to elect Trump.

To alter the trajectory in 2020, the October surprise probably would have to be akin to a very public meltdown by Joe Biden – a “lying, dog-faced pony soldier” moment on steroids – that would clearly signal he’s not up to the job. While Biden’s gaffes, exaggerations and garbled comments have been on frequent display during the 2020 campaign, they haven’t been concentrated or dramatic enough to puncture his advantage in preelection polls.

Why it won’t happen: Presidential elections may be growing immune to late October surprises, given the popularity of early voting and the advent of extensive mail-in balloting. As such, millions of Americans will have cast ballots for president well before Election Day – tempering the impact of any late October surprise.

In states such as Wisconsin and Michigan, which were crucial to the outcome in 2016, preelection polls pointed to a clear lead for Hillary Clinton – an advantage that evaporated when votes were counted. Clinton’s polling advantage in Wisconsin, for example, was 6.5 percentage points at campaign’s end; Trump carried the state by less than a point. Such errors are not entirely out of the question in 2020.

Why it won’t happen: This scenario essentially is a 2016 replay. If the history of election polling tells us anything, it is not to expect elections, or polling failures, to replicate themselves. Not only that, but considerably more scrutiny is being devoted to polling in battleground states in 2020 than four years ago. Such attention may render this scenario unlikely.

This is a nuanced scenario that recalls Bill Clinton’s 1996 reelection, when he defeated Republican Bob Dole by 8.5 percentage points – a comfortable margin but not the blowout many polls and pollsters had anticipated. At the end of October 1996, veteran California pollster Mervin Field declared Clinton was “heading for as big a win” as Ronald Reagan’s 18-point landslide in 1984, when he carried 49 states.

The polls in 1996 didn’t miss on the winner, but some were well off the final margin. For example, the end-of-campaign CBS News survey estimated Clinton’s lead at 18 points, nearly a 10-point miss.

Why it won’t happen: Polling failure in presidential elections is rarely duplicated. A rerun of the 1996 scenario depends on Biden holding a double-digit polling lead in the campaign’s final stages – a time when presidential races tend to tighten. Biden’s aggregate lead in national polls, as compiled by the RealClearPolitics website, stood at 8.6 percentage points two weeks before Election Day.

This theory maintains that because they want to avoid disapproval, some Trump supporters conceal their preferences from pollsters and others. They are reluctant to acknowledge support for such a divisive character.

Because they are guarded about their intentions, these undercover supporters skew polling data because they supposedly are so hard to find, or fail to answer candidly when they are interviewed. By turning out in great numbers, the theory goes, “Shy Trump” voters could tip the electoral vote to the president.

Why it won’t happen: Such voters probably do not exist in numbers large enough to alter a national election. Assessments by pollsters and polling organizations have suggested as much. Besides, Trump’s outdoor rallies indicate that his supporters aren’t exactly reserved about expressing political preferences.

Why it won’t happen: Polling since 1948 has become more sophisticated in techniques and more numerous in practitioners. It is almost inconceivable that contemporary election pollsters will be profoundly and uniformly wrong in 2020. While 1948 does offer an intriguing prospective precedent, this is a most improbable scenario.

[Get our most insightful politics and election stories. Sign up for The Conversation’s Politics Weekly.]