52 Years Ago, Vietnamese Commandos Overran a Covert U.S. Military Base 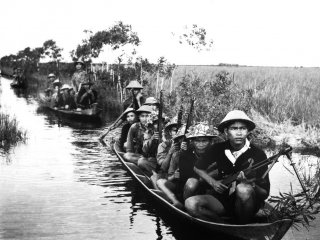 Here's What You Need to Remember: Preserving the memory of shadowy episodes like the battle of Lima 85 may not heal the wounds of the past, but it can help bring about an honest reckoning of the mistakes that were made and inspire reflection as to how to avoid repeating them in the future.

This was far too late. The Truong’s infiltrators were in position by 3 AM that morning and knocked out Hmong guard posts and the base’s TSQ-81 radar and power generator using rocket-propelled grenades. When base commander Maj. Clarence Barton and several Air Force technicians rushed out to assess the situation, they were gunned down by the commandos. By 4 AM, the first three cells had captured all of their objectives. Some were captured and then flung over the cliff on Truong’s orders. Only cell 4 was forced to disengage from its objective, unable to dislodge a superior Hmong force of two infantry platoons and a mortar squad deployed around the airstrip.

Muoc’s assault on Lima 85 had significantly weakened the U.S. air campaign over North Vietnam and Laos. According to Vietnamese accounts, he lost only one commando and killed at least forty-two Thai and Hmong troops as well as a dozen U.S. airmen. However, Truong would return home to a court-martial rather than a hero’s welcome; his superiors were outraged that he had destroyed the valuable TACAN equipment and killed the technicians instead of capturing them.