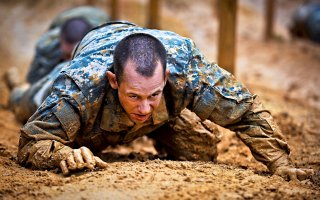 Here's What You Need to Know: Some things are better the second time around.

In 2020, Staff Sergeant Monte L. Gould, a 59-year-old veteran, graduated from Army boot camp in the top 10 percent of his class.

This was the second time that Staff Sgt. Gould graduated from Army basic training. His first time was in 1978, when he first entered the military. He initially served in the Marine Corps, then in the Army National Guard with a Civil Affairs unit, with which he deployed to Afghanistan, and finally finished off his enlistment with a stint to a Psychological Operations unit.

In 2009, Gould left the military, only three years away from retirement, to spend more time with his family and pursue a career in law enforcement.

But after a 11-year break in service he is back.

Speaking about his fellow recruits in boot camp, Gould said that they were awestruck to be going through basic training with a 59-year-old man. But that also served as motivational fuel for many: if the ‘old man’ can do it, then so can I, they thought.

“After the first two weeks, I said to myself, ‘This isn’t going to be hard,'” he said about his experience in boot camp. “And anytime it did get a little bit hard, I just said, ‘Dude, what are you whining about? You’ve been through way worse than this.’”

Talking about his first time through boot camp and now, Gould said that the first time “I was in the Marines, and this is the Army. . . it is 43 years later. The context is this. It’d be like taking a guy that went through Marine Corps boot camp in 1944 and putting him back in boot camp in 1986.”

His reenlistment, this time in the Army Reserve, took more than a year because of his extraordinary background and age.

His experience offers an opportunity to see the change that basic training has undergone in the last four decades. According to Gould, the modern iteration of boot camp is better geared for the rigors of the job. Physical training, for example, is cleverer and more targeted. Drill instructors don’t PT recruits to failure but rather take a more constructive approach that allows the bodies of the recruits to become stronger, faster, and more agile. That doesn’t mean that boot camp is easy. Rather, it means that it’s more professional and focused on the demands that young troops will be facing in their careers regardless of how many years they serve.

“To me, this is a last hurrah. To have the opportunity to serve again is a thrill. I’m looking down the gun barrel at 60, and I know all the health problems that come after that,” added Gould. As for his motivation for redonning a uniform? Give back to the younger troops (and secure that retirement!). Staff Sgt. Gould is committed to staying in uniform for as long as his body and his superiors will allow it.

The almost 60-year-old Soldier will be joining a Las Vegas detachment of the 405th Civil Affairs Battalion. But this time around there is a pleasant twist: He will be serving alongside his son, Specialist Jarrod Gould.