ABMS: Networking F-35s, B-2 Bombers and Tanks for the Next War 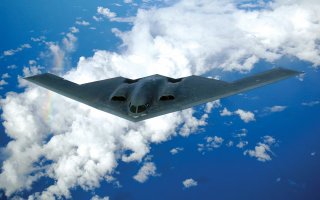 Here's What You Need to Know: ABMS is an integral part of the Pentagon’s much-discussed and emphasized effort to reach new heights when it comes to joint warfare operations.

The U.S. Air Force is taking massive new steps with its emerging program to expedite, speed up, and streamline air war, and multi-domain, sensor-to-shooter time by quickly moving its well known Advanced Battle Management System (ABMS) to the next level of development.

The move comes following a series of successful phased testings of ABMS designed to assess and refine the ability for war platforms to function as both attack systems and “nodes” within a meshed, combat network system intended to find, track, and share crucial, time-sensitive targeting and surveillance data across the force in near real-time. These tactics, which proved both effective and successful in ABMS testing, help optimize attack and massively decrease the vital and at times life-saving sensor to shooter time pairing the best attack systems or weapons with a given target.

Some of the “2nd On-Ramp” of the ABMS testing included breakthrough uses of AI, data collection, analysis, and transmission, as well as success using a Howitzer artillery platform and hypervelocity projectile to track and take out a fast-moving cruise missile. The speed and accuracy with which this defensive intercept was unprecedented, carving a new multi-domain warfare path. This kind of networking connectivity was made possible by the kinds of innovations central to ABMS, much of which is centered upon the use of AI-enabled networking and advanced algorithms to gather, discern, analyze, and organize intelligence data in seconds, an emerging technical capacity which enables sensors and high-speed interceptors to operate with the speed and precision necessary to take out something as dangerous as an attacking cruise missile.

Roper, and many others both involved with and observing the test, heralded the achievement as a major breakthrough. It was, especially given the networking speed and integration between targeting nodes and a ground artillery system. Also, the development showed the success of new innovations with the use of the hypervelocity projectile, a super-high-speed weapon initially developed for the Navy’s rail gun. Special technical adjustments, including thrust, propulsion and cannon-firing adaptations helped make the intercept possible.

ABMS is an integral part of the Pentagon’s much-discussed and emphasized Joint All Domain Command and Control, or JADC2, a collaborative, multi-service effort to reach new heights when it comes to joint warfare operations. The concept is simple, connect defense nodes such as Army ground-based missile defenses, tanks, Navy surface ships, surveillance planes and even ISR-capable stealth systems such as an F-35 or B-2. Another example of the kind of connectivity ABMS and JADC2 are engineered to address can be found in a successful exercise in Arizona which connected F-35s with ground forces in an unprecedented way. The connectivity took place during the Army’s successful Project Convergence 2020 in the Arizona Desert, wherein Marine Corps F-35s succeeded in quickly sharing targeting and intelligence data with dismounted and armored ground troops on the move. In a similar and commensurate way, ground troops succeeded in sending crucial intelligence information with airborne F-35s. This, as was much of Project Convergence, a communications and targeting breakthrough, shortening sensor to shooter time to a matter of seconds, representing what Army Chief of Staff Gen. James McConville called their services’ contribution to JADC2.

B-2 Bomber: The World's Most Dangerous Aircraft Is About to Get a Serious Upgrade