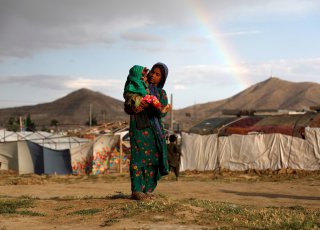 Hopes for peace in Afghanistan were high in February when the US and Taliban signed an agreement to end their long-running conflict. But violence has continued across the country since then.

There has been an increase in both air strikes and raids by US-backed Afghan government forces, and continued Taliban attacks. Attacks on a maternity ward, on funerals, mosques and clinics by both the Taliban and Afghan forces killed hundreds in May.

In the wake of the US-Taliban agreement, Afghan government leaders announced preparations for intra-Afghan negotiations between all sides in the conflict, including the Taliban and other key political factions. But these negotiations have been delayed mainly by disagreements over the nature and mechanisms for prisoner releases and the reduction of violence by all sides.

While a recent power-sharing deal was agreed between President Ashraf Ghani and his rival Abduallah Abduallah in mid-May, it is too early to know how the forthcoming government in Afghanistan will approach peace-making with the Taliban. There is still a long way to go before peace comes to Afghanistan – and to the many people displaced during 40 years of conflict.

War in Afghanistan started with a Marxist coup followed by a Soviet invasion in 1979. While the underlying reason for conflict has altered, hostilities have continued ever since. Research shows that serious human rights violations were committed by all combatants over the last 40 years, including Afghan and international forces. These include summary executions, aerial bombing and drone attacks on civilians, sexual violence, abduction and torture.

Since the US-led war in Afghanistan began in 2001, some 147,124 people, 26% of them civilians, have been killed, and more than 1.8 million people have been internally displaced, adding to the 5.1 million already displaced by previous conflicts. Displaced people fled affected communities, including in Badghis, Kandahar and Helmand provinces, and moved to regions and urban centres throughout Afghanistan.

Our ongoing research with these displaced people is showing how much their lives lack dignity. Between May and October 2019 our team of researchers listened to the stories of more than 1,000 internally displaced people living in camps and cities across the country. Many told us they want a peace settlement that facilitates their return home, their wellbeing and their sense of dignity. But this requires sustainable and humanitarian support focused on their priorities: peace, physical and humanitarian security, education and a livelihood. As one man in Badakhshan said:

Our dignity would be better protected if we were in our village. If it was safe we could return. To me, dignity means a peaceful life and being safe.

While many displaced people want to return to their place of origin, a sizeable minority do not because they fear continued violence and a lack of physical security. Some are also concerned about indignity, injustice, land disputes and a lack of freedom. One woman in Kunduz lamented:

Since I was born, I haven’t seen peace in my country. I’ve never worried or thought about myself or my children but expected a peaceful and secure country. We’re satisfied with a loaf of bread on a mountain but we need peace.

Without creating an environment conducive for the safe and voluntary return of displaced people and for their reintegration into society, the peace process will fail to deliver sustainable solutions. Without a sustainable future, peace will be fragile. Many people, both those who are displaced and the communities that host them, will continue to be attracted to or forced into militancy, as has happened in the past.

The US-Taliban peace agreement only touches on some of these issues. It has strong international and regional dimensions with commitments to withdraw all foreign forces if certain conditions are met, but does nothing to address the culture of local warlords and the violence of their power battles.

In order to avoid future civil war, any post-war government in Afghanistan will have to engage warlords and other factions – including the Taliban – politically as well as culturally.

The Taliban, for example, will need to recognise that their version of culture and religion is at odds with those of the new Afghanistan which embraces human rights and equal access to education and work opportunities for men and women. The intra-Afghan negotiations must respect divergent viewpoints – religious, traditional and secular – and reach common understandings.

The peace agreement also says little about development, leaving the Afghan government to provide basic services such as education and justice and to stamp out corruption. The government needs the international community to invest in sustainable development in the country, but increased aid is unlikely until there is a realistic prospect of peace.