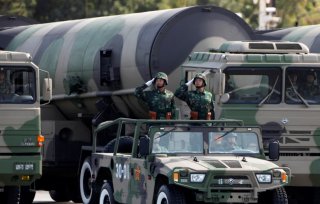 Here's What You Need to Remember: Given all the different vectors through which rocket and missile technology are flowing from Ukraine to China, it’s reasonable to say that Ukraine has provided considerable aid to the Chinese ballistic missile program.

While Ukraine renounced its own possession of nuclear weapons in 1994, many scientists and design bureaus in the country still have the know-how required to manufacture important components of strategic weapons. China has often been particularly keen on this knowledge, acquiring Ukrainian help in designing their first phased-array radar system. Chinese poaching of Ukrainian aerospace, tank, and naval engineers is also a common phenomenon, most notably Valerii Babich, designer of the Varyag aircraft carrier. There are even rumors of “Ukrainetowns” in some Chinese cities founded by the large number of expats hired by Chinese firms. Ukrainian and Russian businessmen even sold Kh-55 nuclear cruise missiles (without the warheads) from Ukrainian stockpiles to China in the 2000s. As China continues to modernize its ICBM fleet, it begs the question: how much help is Ukraine providing, willingly and unwillingly?

This wouldn’t be the first time Ukraine’s ICBM know-how was possibly exported. In the fall of 2017, Ukraine’s Yuzhnoye Design Bureau, based in Dnipro, was accused of providing rocket engines to North Korea. While Ukrainian media has denied this allegation, there was a definite case of Yushnoye employees who were caught selling the plans on the RS-20 (SS-18 “Satan”) to Chinese missile engineers. Although the Chinese engineers were caught by Ukrainian police, Chinese diplomatic influence resulted in the charges being cleared. This trend has continued, as recently as 2016 when a scientist at Dnipropetrovsk National University left for China with many materials regarding the use of composites and heat-shielding coatings on rocket launchers—which were considered Ukrainian state secrets.

However, one telling aspect that could belie significant Ukrainian aid or input into the Chinese missile program is the commonality between their recent missile systems. Sources have said that the development of the DF-4—a train-based ICBM—will speed up the development of their new JL-3 submarine-launched ballistic missile (SLBM). This mirrors the commonality between the Soviet RT-23 (SS-24) train-launched ICBM and the Soviet R-39 SLBM. The first stage of the R-39 is the 3D65, a Yuzhnoye product. This same motor is also used in the RT-23, which was fully designed by Yuzhnoye.

The DF-41 is similar to the RT-23 in many aspects, both use three stages of solid-fuel motors and carry ten MIRV warheads. While China has developed common land/sea missile pairs before in the DF-31/JL-2 and the DF-21/JL-1, the JL-1, and DF-21 are two-stage designs, and the DF-31/JL-2 were originally designed for single warheads, not MIRVs—although the capability was added later. Other sources have noted the similarities between the DF-41 and the RT-23, although Russian sources deny this, citing the extended range of the DF-41 compared to the RT-23.