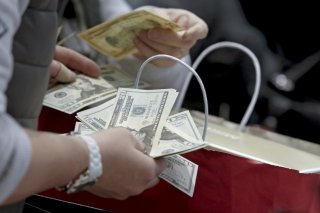 It could have been worse. But, yes, it was pretty bad. Measured year over year, the American economy contracted by 3.5 percent in 2020, according to the Commerce Department this morning. It was the first full-year decline since the Global Financial Crisis and the largest since 1946. (Measured from fourth quarter to fourth quarter, the economy shrank 2.5 percent.) In the fourth quarter, real GDP rose 4.0 percent on an annualized basis, a bit less than expected.

But, still, it could have been worse. Despite all the hot-take kvetching about the United States being a failed state, it certainly didn’t utterly fail in its economic response to the pandemic. Only Japan has spent a greater share of its economy in fighting the virus and its economic impact. Even a brutal recessionary year “still represents a much faster recovery than we would initially have expected given how grim things looked in mid-2020,” writes Paul Ashworth of Capital Economics in a research note to clients.

And the stage is set for a powerful rebound. Ashworth, for instance, is looking for GDP growth near 10 percent in the second quarter of this year. As I write in my new The Week column: “The consensus Wall Street forecast is for at least 4 percent growth this year and 3 percent next. What’s more, it’s not hard to find forecasters looking for even faster growth, perhaps the best two-year stretch of economic growth since the mid-1980s.” (Assuming, of course, vaccine effectiveness and rollout is as expected.) This from JPMorgan’s Michael Feroli:

For the household sector, nominal disposable personal income contracted at an 8.2% rate last quarter. This was due to a lower level of federal government income support: labor compensation increased at a 9.2% pace in Q4. Even with the drop in disposable income, the personal saving rate in Q4 stood at 13.4%, about 6%-points above the pre-pandemic average. This elevated saving rate, along with transfers from the Response and Relief Act and whatever other federal income support is enacted into law this year, should support some hefty gains in consumer spending this year (provided we get all these viruses under control). We look for the pick-up in consumer spending, and overall GDP, to gain traction in Q2.

And while most bullish forecasts assume more relief/stimulus, they aren’t assuming another $2 trillion burst of spending, such as what President Biden is pushing for. It’s OK for policymakers to begin considering the debt impact of what comes next out of Washington. It’s also OK to think about the longer-term challenges facing the economy after the 2021-2022 growth blip. Most economists are assuming a return to the slow-growth mode in 2022 or 2023, what became known as the “new normal” after the GFC. Let’s turn the blip into a boom.