After Crackdown, China Insists Hong Kong is Still Open For Business - But Business Isn't Sure 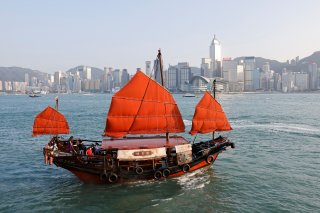 The decision of Hong Kong’s opposition legislators to resign en masse after the government disqualified four of their colleagues on allegations of threatening national security has caused dismay around the world. But another important resignation in Hong Kong, a couple of months ago, received less media coverage.

In September, Australian judge James Spigelman resigned from Hong Kong’s Court of Final Appeal on the basis of his doubts about the territory’s now infamous security law, which was adopted directly by Beijing in June.

The participation of foreign judges in this court had long been a symbol of judicial independence and a guarantee for international business activity. The latest developments challenge this assumption as well as the presence of the remaining British non-permanent judges at a time the UK government is considering measures against its former colony.

Claims by Hong Kong’s chief executive, Carrie Lam, that there is no separation of powers in Hong Kong – and that governance in the territory is “executive-led” may be pleasing to mainland China. But it is becoming clear that Hong Kong’s Basic Law is increasingly subordinate to interpretation based on decisions made by Beijing.

Hong Kong’s Basic Law represents the mini constitution negotiated by London and Beijing before the 1997 handover and provided Hong Kong’s citizenry with a series of rights precisely designed to reduce China’s influence on the territory. Judicial independence was guaranteed by article 85. But the system rested on fragile grounds as the powers of interpretation and amendment of this Basic Law were given to China via articles 158 and 159.

These two last provisions, together with Article 23, which defines sedition and subversion in a very loose manner, effectively rendered the democratic legacy of the British null and void. This was clearly seen in 2004 when the Chinese National People’s Congress ruled out the possibility of universal suffrage for the election of Hong Kong’s chief executive, who is selected on the basis of their allegiance to Beijing.

With the passage of the new security law – or, to give it its full title, the Law of the People’s Republic of China on Safeguarding National Security in the Hong Kong Special Administrative Region – the independence of the territory’s already vulnerable judicial system is under threat.

Articles 12, 16 and 18 are particularly worrying. On their basis, Hong Kong is establishing a “Committee for Safeguarding National Security”, the police force is creating a “department for safeguarding national security with law enforcement capacity” and, finally, the Department of Justice is putting in place a “specialised prosecution division responsible for the prosecution of offences endangering national security and other related legal work”.

What can then remain of the independence of the judiciary while the very definition of national security is extremely broad and can virtually cover anything and anyone including Hong Kong foreign residents and visitors?

One Country, One Business System

The days of “one country two systems” – which is supposed to allow for Hong Kong’s specific legal status – appear to be long gone. This will inevitably have repercussions for the territory’s status as an important business and legal hub.

Over the summer, the Bank of England revealed that the equivalent of US$5 billion (£3.7 billion) flowed out of Hong Kong in 2019. Multinational corporations, among them some big Silicon Valley players, are considering their position. Many are contemplating relocation to Singapore or Tokyo.

Hong Kong remains a top financial centre with more than 150 licensed banks and more than 1,600 asset managers as well as associated professional services. It is also the Chinese hub for foreign direct investment as the only financial centre in the People’s Republic of China that has no restrictions on the movement of capital and a Hong Kong dollar firmly pegged to the US dollar.

But in January 2020, ratings agency Moodys downgraded Hong Kong to Aa3 from Aa2. It has since said “indications that further convergence in executive, legislative and judicial institutions with those of the mainland over time was materially weakening Hong Kong’s macroeconomic and financial policymaking institutions”.

Hong Kong’s legal establishment continues to project confidence that it is “business as usual”, but this might not suffice to reassure foreign companies operating there that may be nervous about the mainland’s intentions. Can Hong Kong remain an international dispute resolution centre attracting commercial arbitration when this involves Chinese parties? What about the selection of arbitrators, their independence and impartiality?

Institutions such as the Hong Kong International Arbitration Centre (HKIAC) and International Chamber of Arbitration have been renowned for their independence, which has allowed Hong Kong to retain its position as a regional hub. But international fears of increasing Chinese interference in Hong Kong’s political and legal systems will be capitalised on by rival centres, particularly Singapore, which is already a hub for arbitration in certain sectors, including the maritime industry.

So the perception that Hong Kong’s judicial independence might be under threat is a particular concern, which could have serious consequences for the island’s future as a major regional business hub.

Leïla Choukroune, Professor of International Law and Director of the University Research and Innovation Theme in Democratic Citizenship, University of Portsmouth