After A Military Parade, Will North Korea Hold Off On More Missile Tests? 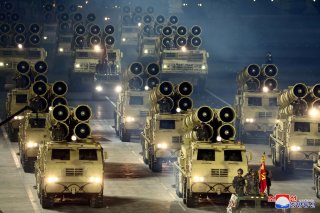 In the short term, North Korea is unlikely to resume nuclear warhead or long-range missile tests. Three of the more salient reasons for Pyongyang’s restraint are the effectiveness of sanctions, societal and political realities in the North and the preservation of bargaining prospects.

Notwithstanding the reality that North Korean leader Kim Jong-un has authorised more serious tests than both his father and grandfather combined, a fair case can be made that the Korean Peninsula will see strategic stability in the short term, with no nuclear or long-range missile tests. Grim predictions have been made that North Korea will test a seventh nuclear warhead or a long–range nuclear missile at the end of 2020. The months ahead may still pass without either of these destabilising acts of nuclear aggrandisement.

These have resulted in a loss of billions of US dollars when coupled with restrictions on the import of oil and petroleum, the prohibition of North Korean textile exports and the compulsory repatriation of all North Koreans working overseas by December 2019, from whom Pyongyang earned many hundreds of millions in remittances annually. The sanctions have imposed a truly substantial economic toll, seriously affecting Pyongyang’s nuclear and missile endeavours. Kim has not authorised a nuclear detonation or long-range missile test since 2017, suggesting that the sanctions have indeed had a dissuasive effect.

Despite North Korea’s attempts to evade sanctions through methods such as transfers of prohibited goods at sea or even cybercrime against other sovereign states, the fact remains that such measures only marginally alleviate the financial deprivation. The Kim regime is desperate to avoid pushing the permanent members of the UNSC any further.

Kim realises that even Russia and China subscribe to global nuclear non-proliferation norms and will have no choice but to tighten sanctions in response to further offences. Unlike the surgically targeted sanctions before 2016, aimed only at the North’s weapons programs, the next rung of sanctions pressure risks jeopardising North Korea’s viability. With the 75th anniversary of the Worker’s Party of Korea on 10 October and the Party Congress in January 2021, Kim would likely prefer reporting to his elite progress rather than further sanctions in the months ahead.

Kim Jong-un can afford to be patient; the pressure the nation is currently under is harsh but does not force him to act. North Korea’s societal resilience and political realities mitigate the chance of the predicted weapons tests. From the end of the Cold War, the cessation of Russian and Chinese aid and, most recently, comprehensive sanctions, North Korea has found itself languishing in stagnation. Estimates from the Bank of Korea indicate that from 2010–2019, North Korean GDP either contracted or expanded at lacklustre rates.

But in the broader context of societal suffering endured during the nationwide famine from 1994–1998 — where up to 3.5 million people could have died — it can be safely inferred that North Korea’s population is resilient. Despite widespread damage to housing and farmland from a series of devastating typhoons in September, the North Korean psyche appears quickly able to shrug off the hardship.

Welfare deprivation might be more readily tolerated by North Korean society than populations elsewhere. With North Korea’s people facing serious hurdles to revolt despite substantial material duress, Kim Jong-un may have the confidence to display strategic patience, waiting out the uncertainties currently preoccupying the rest of the world.

Arguably the greatest threat to national security from Pyongyang’s perspective is the United States. Despite Pyongyang’s ongoing hostile rhetoric towards Washington, the Kim regime knows that it is in its best interests to maintain diplomatic engagement around denuclearisation at this stage. Kim appears to trust that the United States will not initiate conflict while negotiations are in progress, and the three meetings between Kim and Trump are still recent memory.

It is unlikely that Kim will abandon diplomatic bargaining by initiating a destabilising phase with provocative missile tests or a nuclear detonation. With Trump preoccupied with his re-election campaign — and the uncertainty around the outcome — it is logical for Kim to adopt a wait-and-see approach until after the US elections. If short-term restraint avoids further punitive sanctions, it gives Kim the opportunity to quietly progress weapons programs, potentially giving him more bargaining chips once talks with Washington resume.

Although a preference for short-term maintenance of the status quo can be logically inferred, it does not stand up to unpredictable ‘black swan’ events, such as the incapacitation of Kim Jong-un.

It was widely reported that he recently underwent heart surgery, fuelling rumours that aggravated fears of instability on the Korean Peninsula. It was only with Kim’s much later reappearance that the rumours were quashed and anxiety over political upheaval in the North subsided. If any serious external shock or domestic incident occurred, short-term stability could be rendered moot.

Liang Tuang Nah is a research fellow in the Institute of Defence and Strategic Studies at the S Rajaratnam School of International Studies (RSIS), Nanyang Technological University, Singapore.