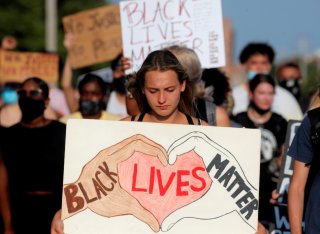 In the days following a vigilante shooting in Kenosha, WI, activists and supporters launched GoFundMe pages soliciting donations for the families of the dead, the medical expenses of the injured, and the costs of the shooter’s legal defense. GoFundMe has since removed the legal defense fundraiser for Kyle Rittenhouse. For those who see the shooting as a case of self-defense, GoFundMe is attempting to deny a young man legal assistance for partisan reasons. Others, proceeding from the belief that Rittenhouse is a mass shooter, looked askance at Facebook’s initial failure to remove statements supporting him, likening #FreeKyle to genocide advocacy in Myanmar.

It has become an all-too-familiar script. Some confusing, symbolically charged event occurs and partisans assemble disparate sets of often correct—albeit incomplete–facts. They then interpret them according to their tribe’s values. It is not simply a matter of different camera angles (though there is plenty of jockeying for those) but of the partisan frameworks used to interpret what everyone sees. This produces incompatible narratives that frustrate nuanced deliberation, lasting grievances that can be drawn upon in future conflicts, and a no-win situation for social media platforms.

Expectations of platform policy are inevitably informed by partisans’ incompatible narratives; moderation on the basis of any one perspective will alienate users with conflicting views. Because most public commentary and media coverage proceeds from one narrative or the other, when platforms fail to reflect partisans’ preferred account, their decisions are taken as evidence of irresponsibility or bias. Platforms’ attempts to maintain neutrality are treated as a failure to face facts.

Platforms don’t do enough to maintain consistency across high-profile divisive incidents, and their learning process is often an attempt to discover which stance will invite the least pushback. Services such as Gab and Mastodon offer alternatives to mainstream platforms that increasingly embrace popular narratives. This paradigm offers platforms of last resort to disfavored speech, but directs partisan demands toward the internet infrastructure that supports these alternatives.

The current environment of polarized expectations of platforms has been long building. Eight years ago, George Zimmerman used a personal website with a PayPal plugin to solicit donations for his legal defense after killing Trayvon Martin. Activists created Change.org petitions were asking PayPal to remove Zimmerman’s account, though the company did not act on the request. After a few weeks, having raised $200,000 and ostensibly worried about impostors, Zimmerman took the fundraising website down.

The role of payment processors has since become more explicitly politicized as mainstream platform moderation has become more restrictive. As disfavored speakers move to their own platforms, deplatforming efforts have shifted to the payment processors and web infrastructure providers that make it possible to create a personal website.

In August 2014, Darren Wilson, the Ferguson police officer who shot Michael Brown, raised money for his legal defense via GoFundMe. In response to complaints about the fundraiser, GoFundMe issued the following statement:

This is a broadly balanced, seemingly rule-based approach that is unlikely to completely satisfy anyone, justified with an appeal to neutrality. At the time, however, GoFundMe’s community standards were limited to rules against gambling, Ponzi schemes, and fundraising for the creation of illegal products. A month later, the platform added more specific content guidelines including a prohibition on “campaigns in defense of formal charges of heinous crimes, including violent, hateful, or sexual acts.” Although this language would not have prevented the fundraiser for Wilson, as he had yet to be charged with a crime, the incident prompted the platform to expand its policies.

This episode also illustrates how one platform’s moderation can have spillover effects onto others. Although Facebook is an edge provider, engaging directly with users rather than providing services to websites, its provision of a digital identity in the form of a Facebook profile cause its decisions to ripple across the internet to other services. When Facebook, perhaps belatedly, deemed Rittenhouse a mass shooter, it limited its users’ ability to share links to fundraisers for him. The Wall Street Journal criticized Facebook’s decision, noting that unlike a court of law, “the platform may only be used to declare Mr. Rittenhouse’s guilt, but not his innocence.” This matters to Facebook as well as Rittenhouse. If a jury finds him not guilty, Facebook’s decision to apply the “mass shooter” designation will undermine the label’s legitimacy in more clear-cut cases.

In 2015, GoFundMe removed a fundraiser for officers charged in connection with the death of Baltimore resident Freddie Gray. A platform representative explained the decision with reference to their new policy, saying “GoFundMe cannot be used to benefit those who are charged with serious violations of the law. The campaign clearly stated that the money raised would be used to assist the officers with their legal fees, which is a direct violation of GoFundMe's terms.”

Later that year, GoFundMe was again embroiled in controversy over fundraisers for bakeries refusing to provide cakes for gay weddings. While some fundraisers attempted to raise money for the bakeries’ legal defense, a prominent campaign in support of one bakery, Sweet Cakes by Melissa, sought to crowdsource paying a fine imposed for breaching Oregon antidiscrimination law. GoFundMe removed the campaign, though only after it raised more than twice the $135,000 fine, and appended “discriminatory acts” to its policy on campaigns in defense of formal charges

A year later, perhaps hoping to put the issue to bed entirely, GoFundMe imposed a blanket ban on fundraisers for “the defense or support of anyone alleged to be involved in criminal activity.” GoFundMe maintained the prohibition until 2018 when it began once again allowing criminal defense fundraisers while reserving the right to remove specific fundraisers at their direction. The current terms prohibit “campaigns deemed by GoFundMe, in its sole discretion, to be in support of, or for the legal defense of alleged crimes associated with hate, violence, harassment, bullying, discrimination, terrorism, or intolerance of any kind.” Although this change liberalizes platform policy relative to the 2016 ban, it gives GoFundMe’s moderators greater discretion while limiting their ability to justify their decisions with reference to clear rules.

Parts of GoFundMe’s current policy prohibit fundraising for the Kenosha shooter. While partisans disagree about whether Rittenhouse was motivated by hate or misplaced duty and fear, he has undoubtedly been charged with a violent crime. GoFundMe has confirmed that the fundraiser was removed and directed reporters to its prohibitions on criminal defense fundraising.

While both the violent nature of the alleged crime and the broad, “sole discretion” determinative leeway justify GoFundMe’s removal, given the high-profile nature of the case, it isn’t unreasonable to worry that the decision was made in response to public sentiment, rather than a strict interpretation of platform rules. Other self-defense fundraisers do appear on the platform, though probably escaped moderation because of their obscurity. Current fundraisers involving charges of violence don’t cut in any discernable partisan direction: a campaign for a conservative student accused of making terroristic threats sits next to a fundraiser for a black man charged after reportedly defending himself from racists.

If GoFundMe exhibits a bias, it is against contentious, politically-charged criminal defense campaigns. This bias has developed over the past half-decade in response to repeated criticism. Explicit political bias is unlikely—the most successful campaign in the platform’s history was an effort to privately build a wall along the border between America and Mexico, although the organizers of that campaign have since been charged with fraud.

For the most part, crowdfunding platforms would prefer to avoid making political moderation decisions. For fundraising services, the most salient content moderation concerns are fraud (because it leads to angry users demanding refunds) and fundraising for legally-prohibited organizations (because such activity invites inquiries from law enforcement). However, public pressure, whether prompted by critical media coverage or a viral tweet, has rendered some campaigns more trouble than they are worth to mainstream platforms. Given the distance between partisan understandings of the Kenosha shootings, it’s understandable that a platform seeking wide appeal would try to avoid the matter entirely. It may be valuable to maintain easily accessible fundraising platforms that eschew politics, preferring to help America’s little platoons fund their members dojo reconstructions and cross-country moves.

Some fundraising platforms have more specific audiences, however. Under the neutral protections of Section 230 of the Communications Decency Act, entrepreneurs have established alternative crowdfunding sites to serve niche audiences. GiveSendGo, the “#1 Free Christian Fundraising Site,” continues to host a fundraiser for Rittenhouse. Like GoFundMe in 2014, the platform issued a statement that appeals to neutrality, or at least balance, to justify its decision: