Air Force General: The Service Must "Accelerate Change or Lose" 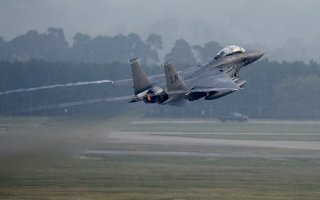 More than 7 months on the job, Air Force Chief of Staff General Charles “CQ” Brown remains a man in a hurry to accelerate change. Having mostly served in joint positions and watching his service from the outside, General Brown has seen Air Force bureaucracy in action. And he’s eager to crush it.

How would the Chief grade himself so far? During the AFA Aerospace Warfare symposium, the Chief and I sat down to talk about the goals and action orders from his “Accelerate Change or Lose” vision. Here are some takeaways from our conversation:

Progress is perfection at this point

“I’ve always hated bureaucracy. It really frustrates me when I watch how slow things sometimes happen when we know we can do better,” said General Brown in our interview. He recognizes that four years is not a lot of time to enact meaningful and lasting change both inside the service leadership ranks and out in the field. Gen. Brown joked that he skipped the extensive time period to study the challenges ahead—saying that those who overstudy the issues are those inclined to avoid making tough calls.

Doesn't like bureaucracy and is frustrated with slow-moving nature of it, both in the field and in Pentagon. Nor are America’s challengers going to wait. Brown characterizes the long-term competition with China and Russia as “at the heart of” an airman’s mission, where all should understand these countries’ military ambitions and how they may conduct future warfare. The service will presumably be eventually graded on the Chief's goal of making Chinese and Russian objectives, mindset, and ways of warfare as “second nature” for airmen.

Refocusing the time, tasks and dollars of the entire Air Force on great power competition is no small job. General Brown’s conclusion for the moment is that as long as there is measurable progress toward this goal, that’s a positive grade.

General Brown came into his position with many ideas within “Accelerate Change, or Lose” already formed. One of his greatest formative jobs was clearly as commander of Pacific Air Forces. From this perch, Gen. Brown clearly recognizes the need to move faster—a goal that oftentimes involves changing Air Force culture.

To do this, the Chief hopes to guide the Air Force through his “five stages of no”:

By remaining consistent and persistent in the pursuit of these goals, even in the face of naysayers and critics, General Brown hopes to steadily enact real change. This won’t be accomplished by edict on high, however. General Brown has called out innovative airmen as part of the solution.

For example, at the AFA symposium, he talked about how the service has become accustomed to going into one location where the base already exists to operate. This is likely to be a luxury in any future conflict. Airmen were asked to get creative about how to operate without bringing additional people or having base access.

The result was this year’s first-ever “hot-pit refuel” of a KC-135 Stratotanker that cut refueling time on the ground by 75%—from a 4 to 6-hour ground operation to one lasting roughly an hour. By reducing the generation time of the aircraft, survivability on the ground increased along with the amount of fuel that is airborne. The new thinking behind the idea came directly from airmen, and this is the model of the future.

The chief and Commandant of the Marine Corps made a splash earlier this year with a joint op-ed in the Washington Post calling on Congress to help redefine readiness, reduce operations tempo, and better balance risk across stakeholders and defense portfolios.

The Air Force has typically had a hard time balancing near-term demand for forces with the need for long-term modernization. General Brown wants to increase the availability of data and usage of models in order to help build a more predictable operations tempo for airmen and families. He is thinking about a new force presentation model, which could help show that deploying in one area could lead to a shortage in another mission.

The chief is busy articulating the risk not only for today but also for tomorrow. His goal is to get others to agree that we cannot just push all the risk onto future generations. General Brown knows that Air Force engagement with Capitol Hill will be essential to progress.

The service will engage with members of Congress much earlier in the budget process than has been done in the past. Brown wants to help better inform the decision-making process by providing more information sooner. His refreshing viewpoint is that the Air Force and Congress must work together; the Hill can’t simply be convinced. Legislators have to be engaged. Similarly, the service must grapple with its sheer volume of classified programs and how to explain them more simply and efficiently.

Balancing risk amongst stakeholders—legislators, civilians, and uniformed members—will help all parties think of legacy weapons in terms of capabilities rather than age. If a capability is not going to be relevant tomorrow, or if it’s going to be overly expensive to make it relevant tomorrow, that’s what the chief calls a “legacy system.”

Obtaining more data and better projection models will help the Air Force determine what legacy systems could be divested without leading to a reduction in readiness, making a case for a more moderate operations tempo, and getting the force healthy after three decades of nonstop churn.

Racism, sexual assault and suicide prevention: “You can’t judge improvement if you don’t know where you are.”

Over the past year, the Air Force has taken a number of concrete steps to combat racism and extremism in the ranks, as well as to prevent sexual assaults and suicides, both of which have been increasing despite previous efforts. Through studies such as the Racial Disparity Review, General Brown has been engaging in conversation with a diverse group of airmen and working to enact real change, such as defining extremism and determining how the UCMJ could be used to combat it. And, after a campaign from the women's initiative team, for example, the Air Force enacted new standards for womens’ hair that permit longer braids and ponytails than in the past.

This example of listening to and learning from service members’ experience also translates to the efforts to prevent suicides and sexual assaults. General Brown suggested encouraging a broader dialogue around sexual assault, beginning in basic training. Most of the reported sexual assault cases involve the youngest airmen, from the ages of 17 to 24. Talking to airmen at basic training, and assessing their backgrounds, would allow for more tailored training for each airman.

General Brown also discussed how the Air Force is working to ease servicemembers’ access to mental health services. Once again, he emphasized the importance of having conversations with airmen and creating a broader dialogue around mental health. He has encouraged units to participate in stand-downs in order to get to know each other better and, as a result, to check on one another more often. The Air Force has also made suicide prevention training more family-friendly and is working to consolidate tools and agencies providing mental health resources in order to make them more accessible and, therefore, more likely to be used.