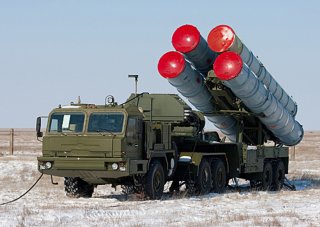 Here's What You Need to Remember: During September’s tests of the S-400 there were no complaints about the equipment and the crew performed their task to the “A” grade the Defense Ministry reported.

The Russian Central Military District announced that it had conducted a live-fire of the S-400 “Triumf” anti-aircraft missile systems this week. The platform had been deployed to the Urals air defense regiment station in the Sverdlovsk Region earlier this year. It is the third regiment set of the S-400 surface-to-air missile systems produced by Russian defense contractor Almaz-Antey to be delivered this year and reportedly ahead of schedule.

“The S-400 ‘Triumf’ teams detected a Kaban target that simulated a tactical missile, practiced its tracking and successfully struck it at an altitude of about 20 km,” the Central Military Districts press office told Tass. “The live-fire is the final stage of accepting the latest systems for service in the Urals anti-aircraft missile regiment.”

Prior to conducting the live-fire exercise, the regiment underwent specialized “retraining” at the Russian Aerospace Force Military Academy’s training center for air defense missile troops in the Leningrad Region in the northwest of Russia.

“As the next stage, the personnel and the S-400 anti-aircraft missile systems will redeploy to their permanent base in the Sverdlovsk Region,” explained Anti-Aircraft Missile Regiment Commander Col. Yuri Semyonov via the press office. “The military hardware will undergo maintenance, following which it will go on air defense combat duty in the Urals area of responsibility.”

The live-fire drills in the Urals took place just days after the Turkish Army had conducted its own launch of the Russian-made Triumf platform near the town of Sinop on the Black Sea coast. Turkey first signed the S-400 deal with Russia in 2017, and the deliveries of the first four missile batteries, worth a reported $2.5 billion, began on July 12, 2019.

Russia had also conducted its own commissioning trials with a target missile at the Kapustin Yar proving ground, which is located about one hundred kilometers east of Volgograd at the end of September. The proving grounds were established by the Soviet Red Army in May 1946.

During last month’s tests of the S-400 there were no complaints about the equipment and the crew performed their task to the “A” grade the Defense Ministry reported. Specialists from Almaz-Antey Air and Space Defense Corporation JSC accompanied the Russian representative throughout the trials.

The S-400 Triumf system (NATO reporting name: SA-21 Growler) was developed and produced by Almaz-Antey. It was designed to provide protection from airstrikes including cruise, tactical and operation ballistic missiles as well as intermediate-range missiles in a radio-jamming environment.

The missile platform can also be used against ground installations.

The S-400, which can also launch 40N6 missiles, is designed to engage targets at a distance of up to four hundred kilometers at up to six times the speed of sound, and at an altitude of up to thirty kilometers under intensive enemy fire and jamming. It entered service in 2007.