The Air Force Owes Its Power to One Swedish Man 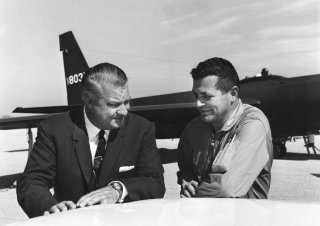 Here's What You Need to Remember: Kelly’s boss at Lockheed, Hall Hibbard, once exclaimed, “The damn Swede can actually see air,” as he tried to understand how one man managed to play such a pivotal role in so many aircraft, and in turn, in how the Cold War unfolded.

Kelly Johnson wasn’t the first man to build an airplane, nor was he the first to push the limits of what an airplane could do, but few men have played a more vital role in shaping mankind’s ascent into the skies.

According to the latest expert estimates, human beings just like you and I have been walking on earth for over 200,000 years. That figure gets even tougher to wrap your head around when you consider that a mere 200 years ago, mankind had yet to develop matches or typewriters. A century ago, we didn’t have antibiotics or movies with sound. These, along with countless other advancements, played a roll in a technological revolution that continues to this day, like a snowball rolling down hill, enveloping everything in its path.

Of course, mankind didn’t come by these incredible advancements by accident (most often, anyway) and behind each groundbreaking technology is a man or woman, dedicated to solving the problems of their day, and to getting out in front of those coming tomorrow. Nowhere is this human-driven rapid advancement of technology more prevalent than in one of our species most recent civilization-altering breakthroughs: aviation.

In 1903, the Wright Brothers first took flight in Kitty Hawk. Less than forty years later, the first B-29 took to the skies with a pressurized cabin and a wingspan that stretched further than the length of Orville Wright’s entire first flight. A mere 19 years after that, Yuri Gagarin flew in space.

There’s no doubt that countless hands, hearts, and minds played vital roles in our rapid progression from the steam engine to the SpaceX Starship, but even amid this sea of engineers and aviation pioneers, some names stick out. Because while millions may have helped mankind reach the sky, some men’s contributions stand head and shoulders above the rest; Men, like Kelly Johnson.

Forged in the fires of World War II

Clarence Leonard “Kelly” Johnson was born in 1910, seven years after the Wright Brothers changed the world in Kitty Hawk. The son of Swedish immigrants, Johnson would win his first prize for aircraft design at the age of 13. By the time he was 22 years old, he was working as an engineer at the legendary aviation firm Lockheed.

At 28, Kelly Johnson’s role at Lockheed would bring him to London, where the island nation was preparing for the onslaught of Nazi Luftwaffe fighters and bombers that were to come just three years later in the Battle of Britain. The British were unconvinced that such a young man could produce an aircraft that could turn the tides of an air war, but the fruit of Kelly Johnson’s labor, dubbed the P-38 Lightning, would go on to become one of the most iconic airframes of the entire war.

At the start of the fighting in Europe, many Allied air units were still operating bi-planes. By the end of World War II, Kelly Johnson and his team delivered the United States its first ever operational jet-powered fighter, the Lockheed P-80 Shooting Star. Johnson had been tasked with building an aircraft around the new Halford H.1B turbojet engine that could compete with Germany’s Messerschmitt Me 262 Schwalbe. In just an astonishing 143 days, Kelly had gone from the drawing board to delivering the first operational P-80s.

It was during World War II that Kelly Johnson and fellow engineer Ben Rich first established what was to become the legendary Lockheed Skunk Works. Today, the Skunk Works name is synonymous with some of the most advanced aircraft ever to take to the skies, but its earliest iteration was nothing more than a walled-off portion of a factory in which Johnson and his team experimented with new technologies for the P-38, developing the first 400 mile-per-hour fighter in the world for their trouble, in the XP-38.

Later, Kelly’s secretive team again came through with the P-80, and again with the design and production of the C-130 Hercules, which remains in service for the U.S. and a number of other Air Forces around the world today. Then, in 1955, they received yet another seemingly impossible assignment: The United States needed an aircraft that could fly so high it could avoid being shot down, or potentially even detected.

Soviet Radar and intercept fighters of the era were limited to altitudes below 65,000 feet, and the highest any American aircraft could reach was just 48,000. In order to continue keeping tabs on the Soviets, the Air Force solicited requests for an airplane that could fly at an astonishing 70,000 feet with a long 1,500 mile fuel range.

Kelly Johnson’s Skunk Works responded with a design that they claimed could fly as high as 73,000 feet with a range of 1,600 miles, based on the Lockheed XF-104 Starfighter, a slender and supersonic intercept fighter. The Air Force rejected his design… but it caught the attention of America’s secretive spy agency, the CIA.

President Eisenhower wanted eyes on the Soviet nuclear program, and Johnson’s unusual aircraft design with long slender wings and no retractable landing gear seemed like it could do the job, despite its shortcomings. Johnson and his team were given a contract to design and build their high-flying spy plane, and in just eight months, they delivered the U-2 Dragon Lady.

In order to test this incredible new aircraft, Kelly Johnson needed a remote air strip, far from the prying eyes of the American public. He chose a dry lake bed in Nevada for the job, and it proved particularly well suited for testing classified aircraft. Eventually, that little airstrip and accompanying hangars and office buildings would come to be known popularly as Area 51.

Taking spy planes to the next level

The U-2 may have been an immense success, but just as aviation advancements were coming quickly, so too were air defenses. In 1960, Soviet surface-to-air missiles finally managed to get a piece of a CIA operated U-2 flown by pilot Gary Powers. The aircraft was flying at 70,000 feet, higher than the Americans thought could be spotted or targeted by Soviet radar, when it was struck by an SA-2 Guideline missile. Powers had to ride the Dragon Lady down from 70,000 feet to 30,000 feet before he could safely eject, and as the secretive spy plane plummeted to the ground, Kelly Johnson and his team at Skunk Works were already developing a platform to replace it.

With spy satellites still more than a decade away, the United States needed a new aircraft it could rely on to keep tabs on the Soviets. It would need to not only fly higher than the U-2, but faster–much faster, so even if it was detected, no missile could reach it.

Johnson and his team designed a twin-engine aircraft with astonishing capabilities in the A-12, which then led to the operational SR-71 Blackbird — an aircraft that retains the title of fastest operational plane in history to this very day. Lockheed’s SR-71 could sustain speeds in excess of Mach 3.2, flying at altitudes higher than 78,000 feet. During its 43 years in service, the SR-71 had over 4,000 missiles fired at it from ground assets and other aircraft. Not a single one ever found its target.

Kelly Johnson and the team at Skunk Works were on the cutting edge of speed and power, but as the Cold War raged on, it was Johnson and his team that recognized how the battle space was shifting. For years, the United States had focused on developing aircraft that could fly ever faster and ever higher, but with the advent of computer-aided engineering, yet another technological leap was within Lockheed’s grasp.

Johnson and his team needed to develop an aircraft that could defeat detection from not only enemy radar, but also other common forms of detection and targeting, like infrared. Using the most advanced computers available at the time, Skunk Works first developed an unusual angular design they dubbed “the hopeless diamond,” as it seemed unlikely that such a shape could ever produce aerodynamic lift.

Undaunted, development continued and by 1976, they had built a flyable prototype. The aircraft was called Have Blue, and it would lead to the first operational stealth aircraft ever in service to any nation, the legendary F-117 Nighthawk.

The F-117, or “stealth fighter” as it would come to be known, played a vital role in America’s combat operations over Iraq in Desert Storm and elsewhere, but this program produced more than battlefield engagements. The technology developed for the F-117 directly led to America’s premier stealth fighters of today: the F-22 Raptor and F-35 Joint Strike Fighter. The latter of those two is expected to serve as the backbone of America’s air superiority strategy for decades to come.