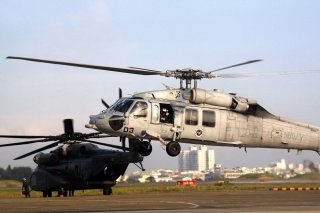 Here's What You Need to Know: The venerable MH-60G chopper has participated in a plethora of combat and humanitarian operations from Panama to Iraq.

A special MH-60G Pave Hawk helicopter and one of the oldest and most famous helicopters in the Air Force’s inventory has officially retired.

A 32-years-old helicopter with more than 11,000 flight hours and dozens of combat deployments, the MH-60G Pave Hawk with tail number 009 flew for the last time in early May.

Its final flight was broken down into two phases. During the first phase, Captain Tanner Bennett, from the 66th Rescue Squadron, flew the chopper from Nellis Air Force Base, in Nevada, to Pensacola Naval Air Station, in Florida. Then, for the second phase, Major General Chad P. Franks, the commander of the 15th Air Force, flew the 009 from Pensacola Naval Air Station to nearby Hurlburt Field.

As a captain, Franks had flown the 009 in Bosnia during Operation Allied Force and had participated in the mission to rescue a downed F-117 Nighthawk pilot in 1999.

“This Pave Hawk represents the hard work and accomplishments of the men and women of the 55th Special Operations Squadron who took great care of 009 when I flew it in 99’. It is an honor for me to fly this retirement flight,” Major General Franks said in a press release.

“The maintenance team was jobbing it. With as many hours 009 has, they made sure that it was safe for everyone,” Captain Tanner Bennett, an MH-60G aircraft commander who flew the 009’s last flight, said. “It’s pretty awesome in terms of rescue history. For us to take her home, with Maj. Gen. Franks flying the last part, and knowing it will be on display for future pilots, is an honor to be a part of. I’m just honored. It’s lucky that this MH-60 gets to ride out into the sunset.”

The Air Force plans to display the aircraft at the Hurlburt Field Memorial Air Park.

This article first appeared at Sandboxx in May 2021 and is being republished due to reader interest.