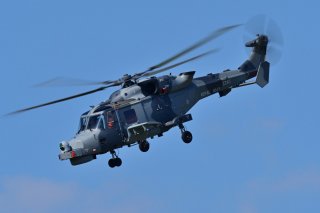 Here's What You Need to Know: China is developing an airborne laser weapon.

The Chinese military’s procurement Web site recently posted a notice about a laser attack pod, according to the state-run Global Times newspaper. The details of the project were listed as confidential, something the U.S. military does when it publishes notices for sensitive projects on the FedBizOps procurement site.

“If equipped on aircraft, the laser could potentially protect against incoming missile attacks and dominate in close-range combat,” Global Times said.

Chinese media noted that the laser attack pod indicated that the device was probably an airborne tactical laser: if it had been a laser designator to guide smart bombs, it would have been called a laser guidance pod.

An airborne laser wouldn’t be China’s first laser weapon. At a 2018 airshow in China, the state-owned China Aerospace Science and Industry Corporation unveiled the LW-30 air and missile defense laser, “which could use a directional-emission high-energy laser to intercept aerial targets such as photoelectric guidance equipment, drones, guided bombs and mortars,” the company told Global Times.

Other nations are working on laser weapons. Russia says its eventual sixth-generation fighter may be armed with a laser weapon, while in 2017, the U.S. Air Force awarded a $26 million contract to Lockheed Martin for development of an airborne laser by 2021. The project, titled Self-protect High Energy Laser Demonstrator, or SHiELD. would consist of a laser, a pod to supply power and cooling, and a beam-control system to focus the laser on the target.

For the U.S. military, airborne lasers are more than a potentially useful weapon to fry enemy aircraft, or protect American planes from anti-aircraft missiles. They could also be a key component of ballistic missile defense: manned aircraft or drones, armed with high-powered lasers and flying North Korea and other nations, could disable ballistic missiles during the initial boost phase of their flight.

But even Chinese media acknowledges the difficulties of creating a airborne laser cannon. “This genre of weapon has not yet seen wide deployment due to remaining technical difficulties including power supply and energy loss problems,” Global Times said.

The poster child of how not to design an airborne laser is the U.S. Missile Defense Agency’s YAL Airborne Laser Testbed, an ambitious attempt to turn a Boeing 747 airliner into a flying laser cannon. Armed with a giant chemical laser powered by what was essentially highly volatile rocket fuel, the YAL was supposed to zap ballistic missiles. However, it proved so expensive and unrealistic – a 747 would have to fly close to enemy territory -- that then-Secretary of Defense Robert Gates scrapped the project in 2009.

However, the YAL concept dated back to the 1980s, and grandiose ideas such as Ronald Reagan’s “Star Wars” missile defense project. Today’s focus is on smaller, more practical laser weapons that can be mounted on a ground vehicle, or on a pod carried by an aircraft.

This still leaves questions, such as whether a sufficiently powerful laser beam can be focused long enough to destroy fast-moving targets such as aircraft, missiles and drones. Nonetheless, airborne laser weapons are moving closer to fruition.